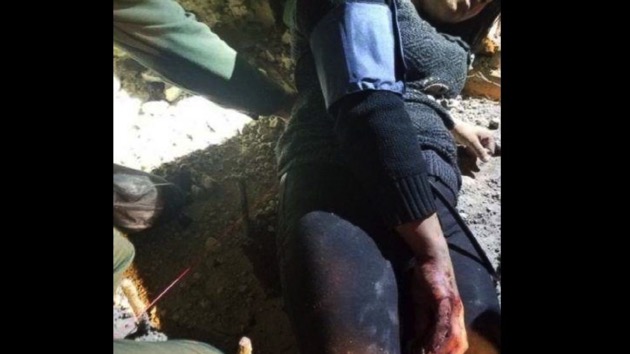 U.S. Customs and Border Protection(SAN DIEGO) — A migrant mom was impaled in front of her children over the weekend while attempting to climb a fence along the U.S.-Mexico border, authorities said.
The 26-year-old Guatemalan native was trying to scale a fence near the San Ysidro Port of Entry, a crossing between San Diego and Tijuana, on Friday when she fell and impaled herself on pieces of rebar, according to U.S. Customs and Border Patrol officials.
San Diego Sector Border Patrol agents said in a statement they found the woman and her two toddlers around 8:30 p.m. and transported her to a local hospital for treatment. Her injuries weren't life threatening.
"The woman landed on rebar that pierced her side and buttocks," according to the statement.
The children, ages 3 and 5, also were taken to a local hospital for an evaluation. They were later released into Border Patrol custody.
"Entering our country illegally, particularly over our walls, is not only dangerous, but also very foolish," San Diego Sector Chief Patrol Agent Rodney Scott said in the statement. "This woman placed her own life and her children's lives in peril."
The rebar is part of ongoing work to replace decades-old fencing at the border, according to the statement.
Copyright © 2018, ABC Radio. All rights reserved.