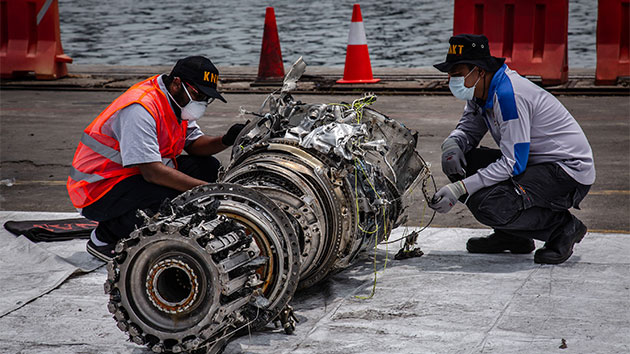 Ulet Ifansasti/Getty Images(NEW YORK) — Black box data from the Lion Air jet that crashed in October reveals the pilots struggled to fight the plane's malfunctioning safety system from takeoff to the moment it nose-dived into the Java Sea, killing all 189 people on board.
Information that surfaced Tuesday from the flight data recorder, and released by Indonesian authorities on Wednesday, indicates the new model Boeing 737 MAX 8's maneuvering characteristics augmentation system, or MCAS, falsely believed the plane was entering a stall, sparking a reaction from the safety system.
The captain's stick vibrated, alerting the pilot to a perceived stall, and the jet initiated a nose down maneuver, designed to recover airspeed.
This occurred more than two dozen times with the pilots batting the aircraft's misreadings instead of shutting off the system, a solution ABC News consultant and former National Transportation Safety Board Director of the Office of Aviation Safety Tom Haueter said is straightforward and part of commercial pilot training.
"The crew wasn't handling the aircraft correctly," Haueter told ABC News, adding that the pilots should have returned to the airport upon the first sign of trouble.
The 78-page report, still a preliminary investigation, did not include analysis or a conclusion.
However, the report's section on safety recommendations also reiterates the 31-year-old pilot, who had over 6,000 hours of flying experience, should not have continued the flight.
"The flight from Denpasar to Jakarta experienced stick shaker activation during the takeoff rotation and remained active throughout the flight," the report read. "This condition is considered as un-airworthy condition and the flight shall not be continued."
Lion Air sent a reminder to its pilots one day after the crash that they should "check any defect" from previous flights and "be ready for any abnormal or emergency conditions by having Memory Items and maneuvers reviewed."
Search officials are still scouring the sea floor for the cockpit voice recorder. That black box's pings are expected to die within the next few days.