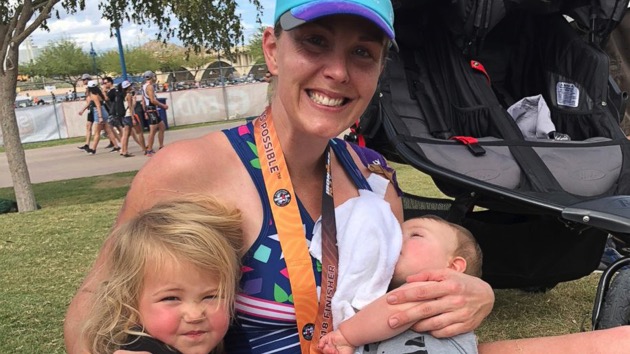 ABC News(NEW YORK) — Air Force Staff Sgt. Jamie Sloan gave birth to her second child, Carter, in March. Just a few months later, in October, Sloan completed the Ironman 70.3 in Tempe, Arizona. The triathlon includes a 1.2-mile swim, 56-mile bike race and a 13.1-mile run.
Sloan, 34, needed to pump breast milk during the transition from the bike race to the run but did not want to lose a shot at setting a personal record. So Sloan decided to pump while she ran and carry the milk with her to the finish line.
A photo of Sloan pumping during the race went viral. Here she explains in her own words how she did it all and what she took away from seeing her photo go viral.
Before having kids, I enjoyed an active life, competing regularly in long-distance endurance events including an Ironman triathlon. But little did I know how much more difficult that would become with kids!
After having Henley, who is two and a half, I struggled with post-partum anxiety, and it wasn’t until I started training and racing again that it began to fade.
When I got pregnant with Carter, now seven months, I vowed to do everything I could to avoid the overwhelming anxiety I’d experienced before.
Once I was cleared by my doctor, I signed up for a half Ironman. I knew it was a lot to bite off, especially with two kids, but having the goal was important to my mental health.
Because I breastfeed, I packed a hand pump, bottle and cap for race day, and planned to pump in transition between the bike and the run.
But on race day, I realized I could set a personal record if I pumped on the run. Becoming nervous about pumping in public, I considered turning back to transition, but then I saw my family cheering for me, got a kiss from my kids, and I felt energized and supported.
My kids motivated me because I want them to know nothing should keep them from reaching their goals.
I was in a lot of pain because I had last pumped seven hours prior, so I busted out my hand pump and fumbled for a milk flow while jogging/speed walking — and tried to stay covered and avoid spilling my liquid gold.
Honestly, I think taking the time to ease into my run helped me when I passed people on the last run loop — and finished my race in 6 hours, 12 minutes, with a huge personal record!
In the end, I did what was right for me and blew my goal out of the water. I hope that by hearing my story, women are encouraged to listen to not only their bodies but their hearts when it comes to reaching their goals because anything is possible.
We all have things in our lives that make reaching them seem harder — whether it is having children, breastfeeding, illness, work, or other life obstacles. But those are just road bumps that make our dreams that much more satisfying when we get to them.
Copyright © 2018, ABC Radio. All rights reserved.