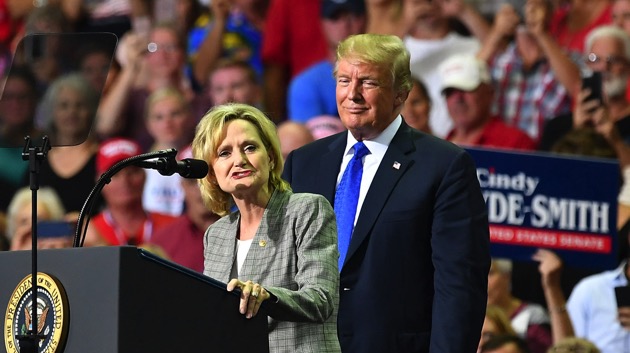 MANDEL NGAN/AFP/Getty Images(WASHINGTON) — The side of Republican Sen. Cindy Hyde-Smith’s campaign tour bus features a huge picture of her with President Donald Trump.
She has a 100 percent "Trump score," which is a measure of how often a member votes in line with Trump’s position, according to FiveThirtyEight. And in the Senate she is only joined on the list by Arizona Sen. Jon Kyl, who was appointed to fill the late-Sen. John McCain's seat, and former Alabama Sen. Jeff Sessions, who was fired earlier this month as Trump's attorney general.
And on the campaign trail, Hyde-Smith was stitching the president’s remarks into her own, showing her fealty to Trump with voters.
"We’ve got a president that is a leader," she told a small crowd in Nesbit earlier this month.
Her campaign strategy to win over Trump’s voting bloc has been successful and voters have said that they see Hyde-Smith as the only candidate who will advance the president’s agenda. Trump’s endorsement earlier this year bolstered her candidacy in a state that voted for him by nearly 20 points in 2016. On Election Day, in the "jungle primary" format, which allowed for multiple contenders in both parties, she garnered 40.6 percent of the vote, just shy of the 50 percent she needed to win the special election outright.
Tuesday's runoff was supposed to be a procedural hurdle for Hyde-Smith, but a series of controversies have helped her opponent, Democrat Mike Espy, gain ground in the deep red state.
Hyde-Smith started her political career in 1999 when she was elected, as a Democrat, to serve as a state senator. She switched to the Republican Party in 2010 and went on to serve as the state's agriculture commissioner. She served as commissioner from 2011 until her appointment to the U.S. Senate in March to fill the seat vacated by Sen. Thad Cochran.
If she wins Tuesday, Hyde-Smith would be the first woman elected to the Senate from the Magnolia State. She is already distinguished as the first woman to represent Mississippi in Congress.
But days after the midterms, her campaign appeared to be stumbling after a series of public statements on video and a collection of public photos from 2014 were released, calling into question her views on race and voting rights. In the first and only debate in the race, Hyde-Smith sought to address those concerns — reading an apology from her notes to "anyone offended by my comments" — a vague reference to the uproar over a racially tinged joke about "public hangings" that pushed the race into the national spotlight.
"For anyone that was offended by my comments, I certainly apologize. There was no ill will, no intent, whatsoever in my statements,” Hyde-Smith said in her statement.
The president has defended Hyde-Smith.
"She made a statement which I know that she feels very badly about it, and it was just sort of said in jest. She's a tremendous woman, and and it's a shame that she has to go through this," the president told reporters.
In a further show of support, Trump was headlining two rallies with Hyde-Smith in Mississippi on the eve of the runoff.