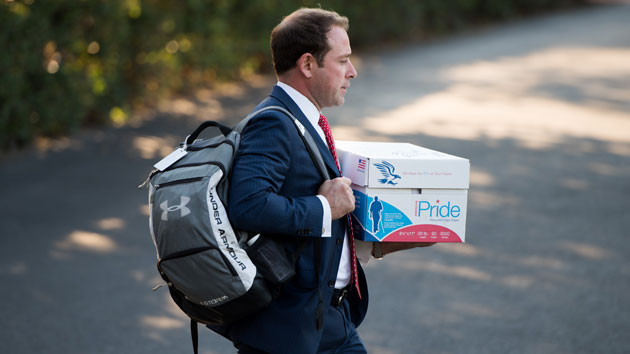 SAUL LOEB/AFP/Getty Images(WASHINGTON) — The second individual to serve as the "body man" to President Donald Trump will depart his role at the end of this year, ABC News has learned. Jordan Karem, who joined the Trump presidential campaign in July 2015, and joined the Trump administration from day one, informed President Trump in the last few days he intends to depart, according to senior administration sources.
“Jordan Karem is great guy who I have gotten to know well over the last several years. He was with me from the beginning and I appreciate his loyalty and his commitment to my administration. He did an excellent job working with me and my team. I know he will do many great things in the future,” President Trump said in a statement confirming the departure.
Karem has not put out a statement giving a reason for leaving.
During the president's campaign, Karem served on the advance staff for events and later joined then-Gov. Mike Pence's vice presidential campaign team as press director. In the White House, Karem first served as the deputy director of advance for the president.
A body man is often referred to as the person who serves as the closest aide to the president.
Trump's small team that sits just outside the Oval Office was originally run by the president's longtime head of security, Keith Schiller, who departed his role in 2017 as director of Oval Office operations. John McEntee, another longtime aide, had served as the president's first "body man" until he was forced out of his position in early 2018.
Copyright © 2018, ABC Radio. All rights reserved.