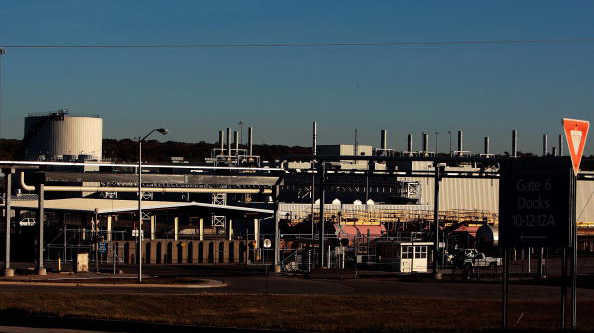 Chris Hondros/Getty Images(WASHINGTON) — General Motors' announcement Monday of plans to lay off 15 percent of its workers and shutter five plants in North America has given new fuel to critics of President Donald Trump's economic and trade policies.
Throughout his time in office, the president has repeatedly pointed to GM as a resounding success story in his efforts to incentivize U.S. companies to bring more jobs back to the U.S. through aggressive deregulation and the GOP tax cut package.
On Monday, President Trump told reporters he’s relayed his displeasure with the news of the company's reorganization directly to CEO Mary Barra and warned that GM had better get a car into production that will sell.
“I was very tough. I spoke with her when I heard they were closing and I said, you know, this country has done a lot for General Motors. You better get back in there soon. That's Ohio. And you better get back in there soon. We have a lot of pressure on them,” Trump said, citing low sales of the Chevy Cruze as a problem for the company.
“Not happy about it. Their car is not selling well, so they'll put something else. I have no doubt that in a not-too-distant future, they'll put something else. They better put something else in,” Trump said.
White House economic adviser Larry Kudlow was set to meet with the CEO of GM at the White House on Monday, in a meeting that a White House official said has been on the books for weeks and was not scheduled in reaction to the day's news about their reorganization.
Rep. Tim Ryan, an Ohio Democrat who represents the Mahoning Valley where GM announced it would be laying off approximately 1,618 employees and shutting down its Lordstown plant in March 2019, pointed directly at comments the president made on a visit to the county in 2017.
"They're all coming back. Don't move. Don't sell your house," Trump said during a rally in Youngstown, Ohio.
"So far, President Trump has been asleep at the switch and owes this community an explanation," Ryan said in a statement.
It's far from the first time Trump has highlighted GM as evidence his economic policies were breaking through for American workers.
"I think you're going to see General Motors — they're coming back," Trump said in February during remarks at a bipartisan meeting of lawmakers on trade. "A lot of companies are coming back, and they're coming back to areas that you represent. It's a good feeling. That's a really good feeling.”
"You look at what's happening with Ford and with General Motors in Michigan and Ohio," Trump said during a press conference in May 2017. "You look at the tremendous number of jobs that are being announced in so many different fields. That's what I'm proud of, and that's what we want to focus our energy on.”
More recently, though, the company has pointed to losses it says are a result of the president’s trade war with China and other countries, saying tariffs on imported steel have cost it $1 billion.
A similar announcement by Harley Davidson back in August that it was planning to shift some production jobs overseas resulted in a swift backlash from Trump, who went as far to encourage his followers to boycott the company.
The White House did not immediately respond Monday to ABC News' request for comment on the GM announcement.