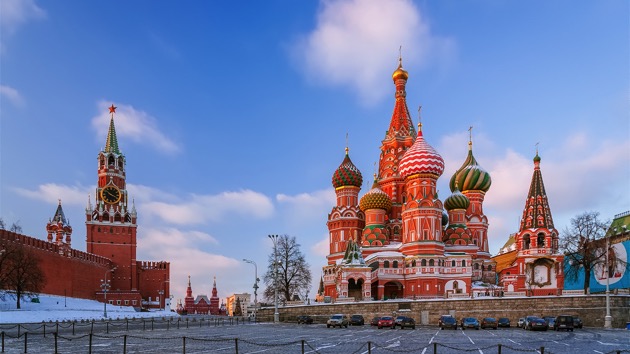 iStock/Thinkstock(MOSCOW) — The United Nations Security Council will hold an emergency session on Monday to discuss the confrontation between Russia and Ukraine in the Black Sea after Russia seized three Ukrainian navy ships close to Crimea.

Sunday's incident marked a sharp spike in tensions between the two countries, prompting concerns that it could escalate the conflict that started four years ago when Moscow annexed Crimea in 2014.

Ukraine’s military on Monday said it has put its forces on full-combat readiness after President Petro Poroshenko asked the country’s parliament to vote on whether to impose martial law in response to the Russian seizure.

The Kremlin on Monday said Russia had requested the emergency Security Council session in New York and accused Ukraine of making a “dangerous provocation” with its ships, which it claimed had violated international law. The Kremlin’s spokesman, Dmitry Peskov, told reporters Russia wants a full inquiry into the incident.
The confrontation in the Black Sea began Sunday when Russia’s Federal Security Service, or FSB, accused two small Ukrainian artillery boats and an accompanying tug of unlawfully trying to enter Russian waters when they sought to cross through a contested stretch of water that separates Crimea from the Russian mainland. Russian coast guard vessels intercepted the Ukrainian ships, setting off an hours-long confrontation which ended with the Russians opening fire on the Ukrainian ships and then seizing them with special forces.

Ukraine’s navy said the Russian fire had damaged the two artillery ships and that six crew members had been injured. Russia’s FSB confirmed that it had used weapons to halt the Ukrainian boats but said three Ukrainians were injured and none had life-threatening injuries.

Hours before the shooting, Ukraine had accused one of the Russian vessels of deliberating ramming the tug. A video filmed aboard one of the Russian ships and posted by Ukraine's Interior minister Arsen Avakov showed the Russian crew urging on their boat to crash into the Ukrainian tug.
The incident represents a sharp escalation of simmering tensions between Russia and Ukraine over the waters close to Crimea. The two sides have sparred for months over access to the Kerch Strait, the stretch of water between Crimea and mainland Russia that opens into the Sea of Azov. A 2003 treaty designates the strait and the sea as shared waters between Russia and Ukraine. But since Russia annexed Crimea in 2014 it has exerted greater control over it, frequently stopping and searching Ukrainian ships, which Ukraine says amounts to a partial blockade. The dispute has intensified since Russia opened a large bridge spanning the strait.

The FSB said it had seized the Ukrainian vessels on Sunday after they had tried to pass through the Kerch Strait, ignoring a temporary closure. Ukraine accuses Russia of a deliberate act of aggression against the ships and of unlawfully closing the strait.

During the incident, Russia blocked the strait parking a tanker in it and causing a backup of cargo ships. On Monday, Russian state news agencies reported that the crossing was now open again to civilian ships, citing a local state shipping company in Crimea.

Russia has now towed the three seized Ukrainian ships to the port of Kerch, on the Crimean side of the strait.
On Monday, Russia’s foreign minister Sergey Lavrov accused the Ukrainian ships of violating international maritime law and of putting other shipping at risk.
“Such a violation, which used rather dangerous methods – maneuvering in a narrow strait – of course, could have created and did create a threat and risks to normal navigation in those waters," Lavrov said.
At a press conference, Lavrov called on Ukraine's "Western sponsors” to calm officials there.

Ukraine’s president Poroshenko on Sunday demanded that Russia immediately release the ships and the sailor aboard them, calling their detention a “gross violation of international law.”
Announcing his decision to propose martial law, Poroshenko however said that it would not mean an immediate mobilisation of Ukraine’s armed forces or that Ukraine would mount offensive operations in the eastern regions that are controlled by Russian-backed separatists.

The European Union issued a statement Sunday demanding Russia restore access to the Kerch Strait and calling on all sides to show restraint. NATO, which Ukraine is not a member of, in a statement backed Kyiv over the dispute.
The incident has immediately roiled Ukraine’s fragile politics. Demonstrators outside the Russian embassy in Kyiv threw smoke bombs at it. In the Western city of Lviv, demonstrators were photographed setting fire to tires outside Russia’s consulate.
In Ukraine, some commentators quickly saw an alternative motivation in Poroshenko’s move to introduce martial law. If introduced, it could be used to postpone presidential elections that are due to take place in March and in which Poroshenko is currently facing dire polling.
“This whole story grows more complicated by the fact that during martial law, it is forbidden to hold presidential, parliamentary or local elections, as well as strikes, protests, rallies and mass actions,” Mustafa Nayyem, a prominent member of Ukraine's parliament, posted on Facebook.
The Kremlin quickly seized on these suggestions. Peskov told reporters that “considering the pre-election situation in Ukraine, this decision certainly smacks of pre-election intrigues.”