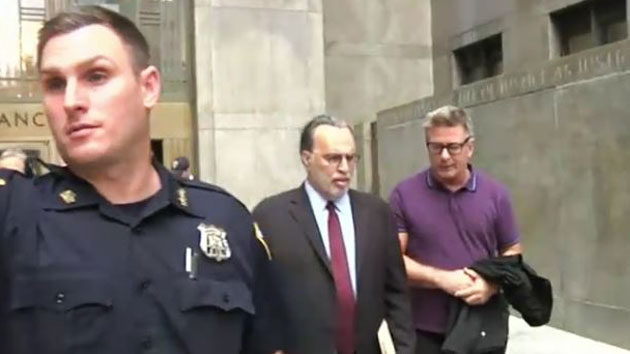 ABCNews.com(NEW YORK) — Alec Baldwin admitted to police that he pushed a man during a street parking dispute this month because he "stole my spot," but the actor pleaded not guilty in a New York City courtroom Monday to charges he assaulted the victim.
Following Baldwin's brief appearance with his lawyer in Manhattan Criminal Court on Monday, officials made public his statement to officers who responded to the Nov. 2 dust-up near his apartment building in New York City's Greenwich Village neighborhood.
"He's an a——," Baldwin told New York City police officers, referring to the victim, according to newly-released court documents.
"He stole my spot. I did push him."
But the alleged victim, whose name has not been released, told police that an enraged Baldwin did more than just push him.
"I observed the defendant push me and then strike me across the left side of my face with his closed right hand, resulting in pain to my face," the victim told police, according to the court papers.
Baldwin, 60 — an Academy Award-nominated movie star and former cast member of the sitcom "30 Rock" — was arrested following the fracas near his home on East 10th Street.
Appearing in court Monday with his defense lawyer Alan Abramson, Baldwin pleaded not guilty to misdemeanor charges of assault and harassment. A judge released him on his own recognizance and ordered him to return to court on Jan. 23.
Baldwin, 60, has a history of legal trouble in New York.
In 2014, after a New York City police officer issued him a summons for riding his bike the wrong way on a one-way street, Baldwin allegedly said, "I don't have identification. Just give me the f—ing summons" and "wrap this summons around your head."
Following Baldwin's arrest this month, President Donald Trump, whom Baldwin impersonates on Saturday Night Live, had a few words of encouragement for the actor, when told about the impending charge.
"I wish him luck," the president said.