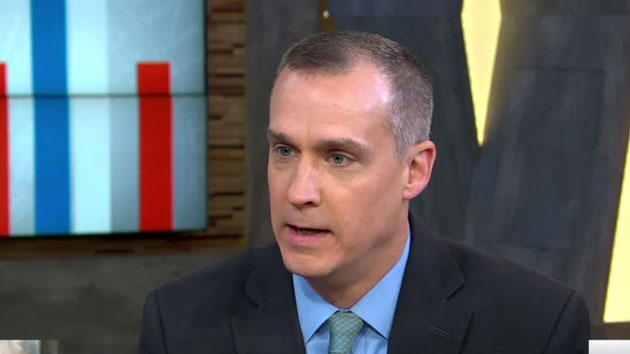 ABC News(NEW YORK) — In a Good Morning America exclusive, two of President Donald Trump’s longest-serving advisers, Corey Lewandowski and David Bossie, revealed details from their upcoming book, “Trump’s Enemies: How the Deep State is Undermining the Presidency.”
While most inside accounts of the Trump administration have painted portraits of a broken White House, an advance copy of the book provided to ABC News shows that Lewandowski and Bossie view themselves as outside protectors of the president.
The pair met with the president at the White House in September for a friendly interview on the investigation of special counsel Robert Mueller. An edited transcript of the interview appears in the book.
During their Oval Office visit, Trump insisted to his former aides what he has often argued publicly: that his campaign in no way colluded with the Russians regarding the 2016 presidential election.
“There was no collusion or cooperation between us and anybody from some foreign entity to impact the outcome of the election,” former Trump campaign manager Corey Lewandowski told GMA Anchor George Stephanopoulos.
As ex-Trump campaign adviser George Papadopoulos began a two-week prison sentence Monday, Lewandowski added that the verdict in his case, and in those involving other former Trump campaign officials, are unrelated to possible Russian ties during the 2016 campaign.
“We know anybody who has been caught in this Mueller investigation … did things that had nothing to do with the campaign. George Papadopoulos … was accused and has been convicted of lying to the FBI.”
Their book, being released Tuesday, identifies administration officials Lewandowski and Bossie claim have worked against the best interests of the Trump White House.
One notable excerpt describes Lewandowski and White House chief of staff John Kelly, who often restricted Lewandowski’s access to the president, nearly getting into a scuffle in the West Wing.
On GMA, however, Lewandowski refused to name Kelly as an ‘enemy’ of the president, instead saying he believes Kelly worked to limit Trump’s access to important advisers who wanted the president to more directly speak his mind.
“There was a mindset inside the White House when the new chief of staff came in to limit the access of people, and to keep him at bay from everyone else. I thought that was a fundamental mistake, so I let John and others know about that,” Lewandowski said.