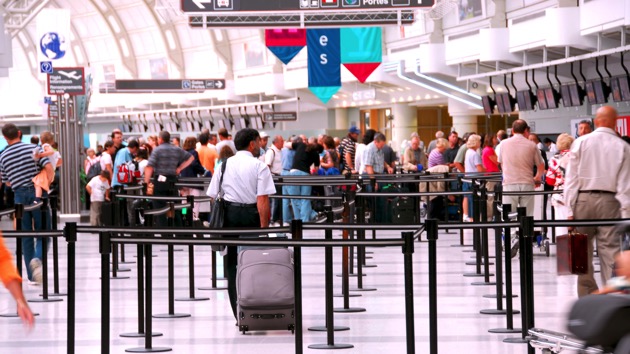 iStock/Thinkstock(NEW YORK) — Airlines were forced to cancel or delay nearly 6,000 flights on Sunday as a dangerous winter storm blanketed parts of the Midwest with heavy snow.
At least 1,265 U.S. flights were canceled and another 5,000 or so were delayed on the final day of the Thanksgiving holiday weekend, considered the busiest travel day of the year, according to the flight-tracking firm FlightAware.
The travel disruptions extended into Monday as well, with about 480 U.S. flights canceled and nearly 200 delayed as of Monday morning.
The winter storm brought blizzard-like conditions to parts of the Midwest and the Great Lakes and shut down major highways in states like Kansas, where the governor declared a state of disaster emergency early Sunday evening.
The declaration came as a large chunk of Interstate 70, spanning much of the state, shut down due to poor visibility and road conditions.
"The Kansas Department of Transportation has reported multiple road closures due to visibility including I-70 eastbound and westbound from Salina to WaKeeney," Kansas Gov. Jeff Colyer said in a statement. "We strongly recommend you postpone travel plans due to the conditions if possible."
Hazardous road conditions also shut down parts I-80 in Nebraska as the fast-moving storm created whiteout conditions that made it nearly impossible for drivers to see.
Kansas City International Airport shut down on Sunday afternoon as crews battled to clear the runway and de-ice planes.
"While airport crews continue to plow and sweep runways and taxiways, the airfield is currently closed to arrivals due to visibility," the airport tweeted Sunday. "Please check with your airline for flight status."
Iowa got the most snowfall among Midwestern states with totals of up to 17 inches, while Rockford, Illinois, got almost a foot, making history as the biggest November snowstorm for that area.
Kansas City, Missouri, saw about 5.3 inches of snow, breaking a November snowfall record set in 1923. The storm also brought dangerous wind with gusts of up to 80 mph in Colorado and gusts of up to 70 mph in Kansas.
The storm was forecast to hit parts of northern Indiana and southern Michigan early Monday before moving further East.
It's expected to bring heavy snow to the New England area and heavy rain to parts of the I-95 corridor, which could lead to possible traffic delays due to flooding in cities like New York and Philadelphia, meteorologists said.