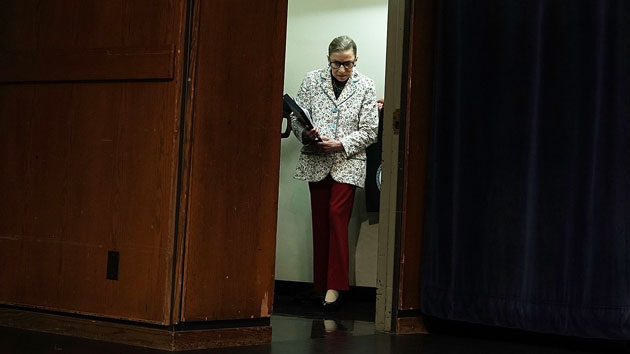 Alex Wong/Getty Images(WASHINGTON) — Supreme Court Justice Ruth Bader Ginsburg was back on the bench Monday in time for the first oral arguments since she fell earlier this month and suffered three fractured ribs.
Ginsburg, 85, fell on the last day of the November sitting, which ended on Nov. 7, and returned in time for the start of the December sitting, which began Monday. She fell in her office on a Wednesday evening, according to a spokeswoman for the Supreme Court, and went to the hospital early the following morning. She was discharged the next day after observation and treatment.
Though Ginsburg reportedly wasn't at court for routine business on the Tuesday morning after her fall, she returned to her office that afternoon. Her Monday return means she has yet to miss a single day of oral arguments since joining the court in 1993. Just over a week after her fall, Ginsburg attended a Medal of Freedom ceremony at the White House for her friend, the late Justice Antonin Scalia, where she received warm praise from the president and Sen. Orrin Hatch, R-Utah, for her quick recovery.
According to Oyez, a law project organized by Cornell University and Chicago-Kent College of Law, Ginsburg didn't miss oral arguments while undergoing chemotherapy for pancreatic cancer, recovering from surgery for colon cancer or the day after her husband died in 2010.
It's also not the first time Ginsburg has injured her ribs. She broke two ribs in June of 2012, then 79, but continued to work after the incident.
Ginsburg is one of four liberal-leaning justices, including Justices Stephen G. Breyer, Sonia Sotomayor and Elena Kagan. With the recent addition of Justice Brett Kavanaugh, President Donald Trump's Supreme Court pick who faced sexual assault allegations during his nomination process, the liberal-leaning justices are in the minority on the court.
Monday's first argument involved Apple v. Pepper, an antitrust case against Apple that looks at iPhone apps.
Copyright © 2018, ABC Radio. All rights reserved.