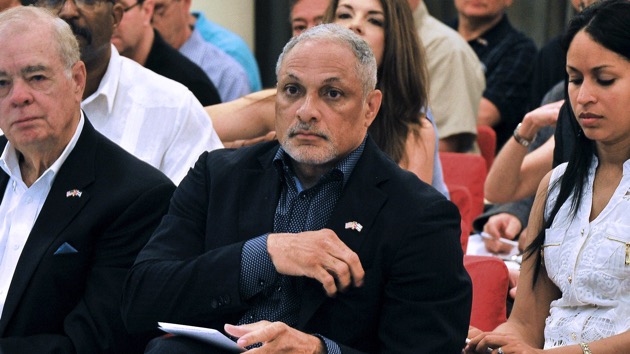 YAMIL LAGE/AFP/Getty Images(WASHINGTON) — Following the special election earlier this month, it looked like Sen. Cindy Hyde-Smith — appointed in March to fill Mississippi's U.S. Senate seat vacated by Thad Cochran — would have an easy runoff victory.
But a series of controversies has created a tight race with Democrat Mike Espy in the deeply conservative state, which voted for President Donald Trump by nearly 20 points in 2016.
To run against his Trump-endorsed opponent, Espy has appealed to moderate voters as a candidate focused on the issues and alluding that he would work with the Trump administration if it’s “good for Mississippi.”
"Whatever comes down the pike, regardless of where it emanates, if it comes from the White House, President Trump, fine," he said. "If it's good for Mississippi, I’ll vote for it. If it comes from the Democratic side, fine. If it's good for us, I'll vote for it. But the converse is also true."
Earlier this month, Espy benefited from the "jungle primary" format in the special election, which allowed for multiple contenders from both parties to compete for the open seat for the remaining two years of Cochran's term. In a field with two Republican candidates, Espy collected 40.6 percent of the vote, only 0.8 percent behind incumbent Hyde-Smith. State Sen. Chris McDaniel netted about 16 percent. One candidate needed 50 percent of the vote to avoid Tuesday's runoff, but in a race with only a Democratic challenger, Hyde-Smith was in position to win.
Then, days after the midterms, Hyde-Smith's campaign stumbled after a series of public statements were caught on video and a collection of photos from 2014 were shared, calling into question her views on race and voting rights.
Initially Hyde-Smith did not apologize for her comments, instead choosing to defend herself. Espy condemned her for evoking language reminiscent of lynchings that scar Mississippi's history.
"Cindy Hyde-Smith's comments are reprehensible," Espy said in a statement. "They have no place in our political discourse, in Mississippi, or our country. We need leaders, not dividers, and her words show that she lacks the understanding and judgment to represent the people of our state."
In the first and only debate on Tuesday, Hyde-Smith sought to address the concerns about her views. She read an apology from her notes to "anyone offended by my comments." Then she called out Espy for using her comments as a "a political weapon."
"I also recognize that this comment was twisted, and it was turned into a weapon to be used against me," she said. "A political weapon used for nothing but personal and political gain by my opponent. That is the type of politics Mississippians are sick and tired of."
He responded, "Well, no one twisted your comments because your comments were live. You know, it came out of your mouth. I don’t know what’s in your heart, but we all know what came out of your mouth."
"It’s caused our state harm," he continued. "It’s given our state another black eye that we don’t need. It’s just rejuvenating those stereotypes that we don’t need anymore."
Trump, who endorsed Hyde-Smith ahead of the special election has defended her and was headlining two rallies on the eve of the special election. But Espy has also garnered support from national political figures including potential 2020 presidential candidates, U.S. Sen. Cory Booker, D-N.J., and U.S. Sen. Kamala Harris, D-Calif.
Sending a Democratic senator to Washington would be a feat for Mississippi and electing the first African-American senator since the Reconstruction Era would be historic.
Espy has been a fixture in southern Democratic politics after serving as the first African-American congressman from Mississippi since the 1800s and as a member of former President Bill Clinton's Cabinet. The former Agriculture Secretary's rising political stardom in the 1990s was halted by a corruption scandal involving personal gifts from food companies he regulated in the Clinton administration. He was acquitted of all charges.
The Yazoo City native’s popularity among the African-American community proved solid on Election Day as 91 percent of black voters, which made up 33 percent of the electorate, voted for Espy on Nov. 6, according to exit polls. But throughout his campaign, Espy has tried to encourage voter turnout from across the political spectrum.
"We have to make sure everyone regardless of race comes out," he told ABC News. "Get the African-American vote out. Get enough of what I call 'purple people.' They may be Republicans, they may be Independents, I don't care."