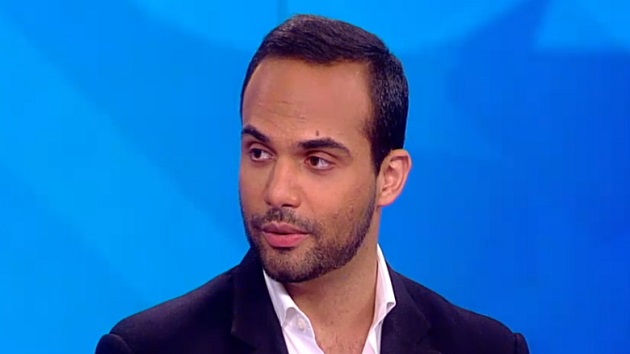 ABC News(WASHINGTON) — A federal judge has rejected last-ditch efforts by one-time Donald Trump campaign aide George Papadopoulos to avoid his looming prison term.
He is scheduled to surrender to a federal penitentiary in Wisconsin on Monday for a two-week sentence.
Papadopoulos pleaded guilty to lying to the FBI last year about his contacts with Russians and at the time agreed to cooperate with the Mueller investigation. In September, a judge sentenced him to 14 days in prison – a sentence due to begin Monday.
But last week, with a new team of lawyers, the man once derided by a former Trump campaign adviser as a "coffee boy" filed a last-ditch appeal with a Washington federal court Friday to try to forestall his looming stint in a Midwestern medium-security penitentiary.
In the court filing, Papadopoulos argued that the court should wait until an appeals court hears arguments in a separate case challenging the validity of the special counsel. Attorneys in that case, which was brought by a man fighting a subpoena from the special counsel, are scheduled to have briefs filed to the court the same day Papadopoulos is due to surrender for prison.
In countering the new appeal, the team of special counsel Robert Mueller argued that Papadopoulos had long since passed the date by which he was entitled to make this argument. His agreement to plead guilty expressly prohibited him from mounting an appeal on any grounds other than newly discovered evidence or ineffective assistance of counsel.
"The defendant received what he bargained for, and holding him to it is not a hardship," the prosecutors wrote in the filing.
Prosecutors also reminded the judge of the contrite appearance Papadopoulos made before he was sentenced to two weeks in prison – a term far shorter than the possible six-month stretch he was facing.
"He said that his parents raised him 'with the principles of honesty and respect for the law,' and when he lied to the FBI, he 'cast aside those principles and compromised the person who,'" prosecutors reminded the judge. "The defendant further stated that, 'standing here in front of the Court and you, your Honor, and the public today signals to all future and current witnesses in this investigation that this investigation has global implications and that the truth matters.'"
The Papadopoulos appeal came after he spent weeks on social media and in TV appearances challenging the validity of the case against him. He did not say why he waited to mount the challenge in court.
On Wednesday, attorneys for Papadopoulos asked the judge to delay his sentence until the separate legal matter challenging the validity of the special counsel investigation had been resolved. That case was brought by Andrew Miller, a former associate of Trump confidant and political provocateur Roger Stone, who has refused a demand from prosecutors to appear before a grand jury. Miller is objecting, his lawyers said, in order to mount a broad legal challenge to the legitimacy of the special counsel probe.
Miller's attorney, Paul Kamenar, told ABC News in August that he believes Miller's constitutional battle could head all the way to the Supreme Court. He has argued that Mueller was not a constitutionally valid special counsel because he should be considered a "principal officer of the United States" because of his broad mandate, and therefore should have been appointed by the president. The Department of Justice has taken the position that he is an "inferior" officer who could be appointed by a deputy, in this case, Deputy Attorney General Rod Rosenstein.
To date, Miller’s argument has not carried the day. Attorneys for Miller tried unsuccessfully two times in July to quash a subpoena requiring Miller to testify before the special counsel's grand jury, arguing that Mueller lacked the constitutional authority to issue it.
Prosecutors in the Papadopoulos matter said he had months to ask whether the Miller challenge could impact his own case – noting that the first court opinion addressing the validity of the Special Counsel's appointment was publicly released on August 2, 2018 – "well in advance of his sentencing, and the litigation the defendant cites as his ostensible reason for delay has long been the subject of much public commentary."
Prosecutors also note that Papadopoulos has failed to establish "that he would be able to surmount the procedural hurdles of his guilty plea, his plea-agreement waivers, and his failure to raise the issues in a timely manner, as would be needed to show that the issue is likely to result in reversal."