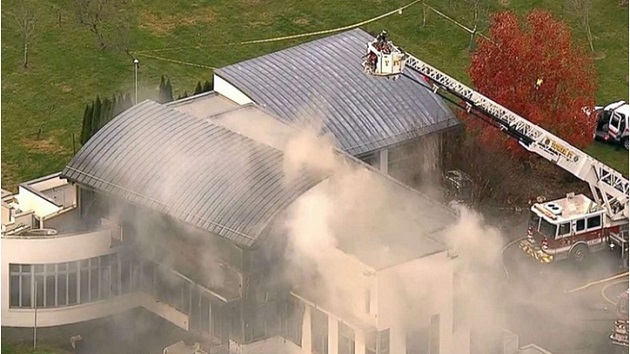 WABC(OCEAN TOWNSHIP, N.J.) — Paul Caneiro, the man accused of setting a fire at his New Jersey mansion last week, will next appear in court on Wednesday, but his family is already stepping up to defend him in a mysterious case that may include the quadruple murder of Caneiro's brother's family.
Caneiro, 51, allegedly used gasoline to ignite a blaze at his Ocean Township home on Tilton Avenue around 5 a.m. on Oct. 20 while his wife and two daughters were inside, according to an arrest warrant obtained by ABC News.
But Caneiro's lawyer, Robert Honecker, told ABC News on Saturday that his wife, Susan, and daughters, Marissa and Katelyn, "fully support him and would be willing to testify at his hearing on Wednesday." All three escaped the fire unharmed.
A decision on if they testify will be made early this week.
On the same day as Caneiro's home in Ocean Township burned, his brother's mansion in nearby Colts Neck, New Jersey, also burst into flames. Authorities responding to the fire found the bodies of Keith Caneiro, Paul's brother and business partner, and his wife, Jennifer, and their two young children. Keith Canero had been shot, while the other three had been stabbed to death, according to police.
Monmouth County prosecutor Christopher Gramiccioni said at a news conference Wednesday that the family was "targeted" in the horrific crime.
"The case has transcended into a multiple homicide investigation in addition to the arson matter. And to date, our investigation has revealed that unfortunately, sadly, each of these individuals were the victims of homicidal violence at some point prior to when the fire was set," Gramiccioni said.
Gramiccioni did not say whether Paul Caneiro is a suspect in the murder of his brother's family, and he has only been charged with aggravated arson in connection to his own home.
Honecker said Wednesday that Paul Caneiro will "assert his innocence for this charge as well as any other potential charges."
The fire at Keith Caneiro's Colts Neck mansion broke out about seven hours after the fire in Ocean Township. The two towns are only about 10 miles apart.
Keith Caneiro was the founder and chief executive officer of Square One, a technology services consulting firm in Asbury Park, New Jersey.
Over $7,100 had been raised by a GoFundMe account for Paul Caneiro's two daughters as of early Sunday.
Honecker said the house in Ocean Township was cleared by authorities Saturday evening and the family has been allowed back in to collect their belongings, but it is inhabitable at this time.
Copyright © 2018, ABC Radio. All rights reserved.