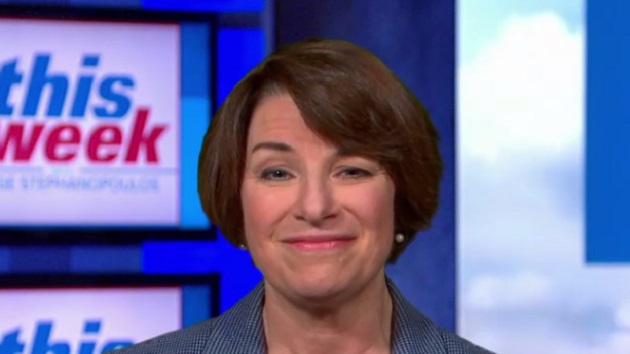 ABC News(WASHINGTON) — Sen. Amy Klobuchar expressed openness to negotiating with President Donald Trump on his signature campaign promise of a wall on the southern border, but explained “border funding” includes more than just money for the construction of an actual wall.
She said she’s willing to go along with some funding “to get an agreement and to make sure we do something on immigration reform.”
ABC News Chief Anchor George Stephanopoulos asked the Minnesota Democrat if she’d be willing to go along with some wall funding to get Democratic priorities passed, like protection for "Dreamers," undocumented immigrants who came to the United States as children and were given protected status during the Obama Administration.
“Remember when we talk about wall funding,” she said on "This Week" Sunday. “We're talking about border funding, we're talking about personnel, we're talking about a whole grouping of things that protect security.”
On Thursday, Trump said a government shutdown “could happen” in December over funding for the wall.
“Could happen, yeah, over border security,” Trump said of a shutdown, “The wall is just a part of border security — a very important part. Probably the most important part. But could there be a shutdown? There certainly could. And it will be about border security, of which the wall is a part.”
Klobuchar told Stephanpoloulos that she doesn't think they should shut down the government, but that it is in the president's and his party's hands.
In a tweet Sunday morning, the president blamed Democrats for the increase in migrants attempting to cross the U.S.-Mexico border.
“Your response?” Stephanopoulos asked Klobuchar after reading the president’s tweet.
“My mom taught second grade until she was 70 years old,” she said. “She always told me if you do something wrong … you take responsibility for it. You don’t blame it on the other kid. That’s exactly what he’s doing here. He controls the White House, his party controls the House and the Senate and it is on them” to do something."
She continued, “First of all, he should have been working with these Central American countries a long time ago to try to … get to a point where we didn’t see this extraordinary amount of people coming through. Secondly, (we need) comprehensive immigration reform.”
Klobuchar said that her party has “the will to put the money at the border for better security and combine it with some sensible reforms, including things like a path to citizenship, things like making sure that we have workers on our fields and in our factories that we need.”
Instead of working with Democrats, Klobuchar said, the president has “gut punched” them and has chosen to "weaponize" and politicize immigration reform.
“We have tried to negotiate with him but he won’t take yes for an answer,” Klobuchar said.
“He has an opportunity here, especially with a new Congress coming in, to get this done,” she said. “Of course, we’re willing to talk about this. But if he wants to just keep playing politics with it, instead of getting it done, we aren’t going to be able to get it done.”
Stephanopoulos also asked Klobuchar about the fourth congressionally-mandated National Climate Assessment, put out by the administration on Friday. The report by 13 federal agencies warned if drastic action isn’t taken to combat the negative impact of climate change it could drastically impede economic growth over the next century.
The report lays out the impacts of climate change on natural resources and environmental services in U.S. territories from Puerto Rico to the country’s Midwest region, which comprises 18 percent of the country’s GDP through agricultural production.
“You’ve said that Congress has to act, but what specifically can be done right now to reverse this?” Stephanopoulos asked.
“The greenhouse gas rules, the clean power rules that we — we’re already on the way to getting implemented, we should get those done,” she said. “Secondly, gas mileage standards, we were clearly on a good path with that and then this administration stepped backwards.”
The findings from the report are directly at odds with Trump’s policies and rhetoric around climate change. The president has rolled back Obama-era environmental policies, like fuel efficiency and emissions standards for cars, as Klobuchar noted, and replacing the former president’s Clean Power Plan with a new plan that would lead to more carbon pollution.
The president also pulled out of the Paris Climate Agreement, an agreement in which nearly every country of the world pledged to curb carbon emissions, which Klobuchar said the U.S. needs to re-enter.
“The administration can’t, on one hand, issue this devastating report showing the facts and then, on the other, do nothing, " she said. "It’s time to act.”