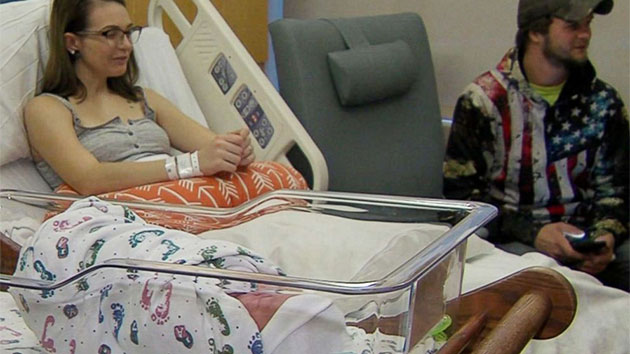 KCRG(NEW YORK) — An Iowa woman gave birth to a baby on the side of the road Thanksgiving morning.
Heather Reed went into labor Thursday morning. She and her partner left their home in Lacona for a De Moines hospital about 40 minutes away, where they expected to have the baby delivered, according to Christopher Clement, public affair officer for Des Moines fire department.
“They made it to about 10 minutes from the hospital," Clement said. "[They] couldn't make it any further, so they had to pull over on the side of the road.”
After pulling his car over, Michael Beller, the baby’s father, called 911.
"I knew that he was coming when I pulled over and she went to the bathroom, and she couldn't get back into the car," Beller told ABC News affiliate KCRG.
The baby had already started coming out by the time paramedics arrived, Clement said.
"When we got there, the child's head was out and [we] finished the delivery. At that point we let the dad cut the cord," Shane Griffin, a paramedic responded to the 911 call told KCRG.
Clement said that the paramedics who responded to the call helped complete the childbirth, then transported the mother and the baby to Des Moines hospital for further care.
The baby was born before noon, and Clement said both baby and mother were safe.
Clement said, “It was nice that the father was able to actually cut the umbilical cord in the ambulance before they went to the hospital.”