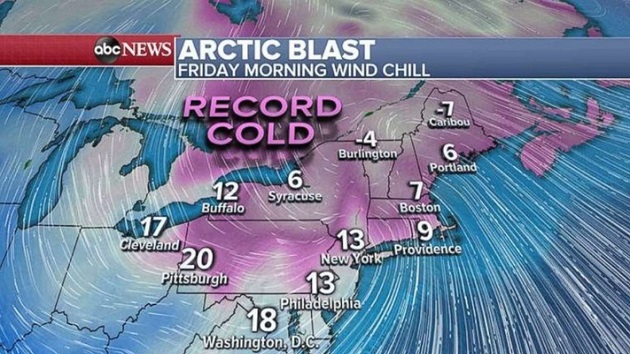 iStock/Thinkstock(NEW YORK) — Record lows were set on Thanksgiving in several cities throughout the Northeast, including Buffalo, Burlington, Hartford, Newark, Rochester and Syracuse.
At 19 degrees on Thursday morning, it was the second-coldest Thanksgiving ever in New York City — where it's still extremely cold this morning. More records could fall today.
A milder air mass is heading toward the region, and temps should jump back up over the weekend, into the 50s along the Interstate-95 corridor.
Most of the storms affecting the Western U.S. over the last few days are now spreading into other parts of the country, increasing the potential for a significant winter storm for parts of the Plains and the Midwest on a very busy travel weekend.
A series of storms out West already has delivered more than 20 inches of snow to parts of the Sierra Nevadas, as wind gusts along the Oregon coast reached 67 mph. Parts of northern and central California saw an inch or two of rain.
Another western storm is sliding into the coast this morning, carrying with it more rain and high-elevation snow. Heavy snow is possible in parts of the Cascades and Rockies through early Saturday morning, with 1 to 2 feet expected. Localized flooding in southern Oregon and northern California also remains a possibility.
A separate storm is expected to develop in the central U.S. later tonight and then slide eastward, bringing a quick round of rain to sections of the Midwest and Southeast. This could lead to some icy conditions in North Carolina and West Virginia.
A coastal low on Saturday may develop and add to the rainfall seen in the Northeast. And on Sunday, a very busy day for travelers, a new storm in the Plains will slide toward the Great Lakes, possibly dropping enough snow to jeopardize flights in cities including Chicago and Kansas City.
Copyright © 2018, ABC Radio. All rights reserved.