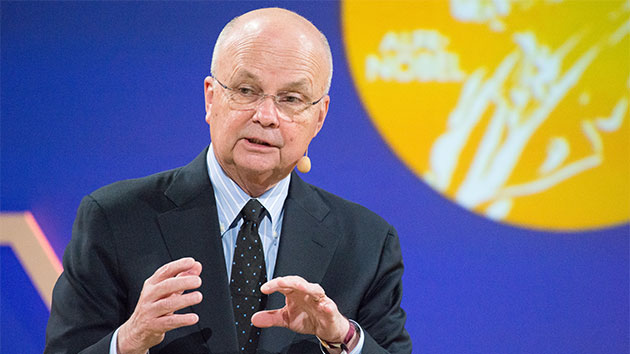 Julia Reinhart/ Getty Images(WASHINGTON) — The former director of the CIA and the National Security Agency, General Micheal Hayden, was hospitalized last week after suffering a stroke at home, his family said Friday.
Hayden, 73, a veteran of the U.S. Air Force, headed the CIA under former Presidents George W. Bush and Barack Obama and also served as director of the National Security Agency under both Bush and former President Bill Clinton.
Hayden "is receiving expert medical care for which the family is grateful," said a statement released by the Michael V. Hayden Center for Intelligence, Policy, and International Security, associated with George Mason University, on behalf of the general's family.
"As General Hayden begins the healing process, the family requests that their privacy be respected. The General and his family greatly appreciate the warm wishes and prayers of his friends, colleagues, and supporters," the statement said. Hayden is a visiting professor at George Mason, founder of the Hayden center and a national security analyst for CNN.
Gina Haspel, director of the CIA, wished the general well on behalf of the organization.
"On behalf of the men & women of CIA, I want to wish Gen. Hayden a speedy recovery. Mike’s long career of public service & commitment to national security continue to be an inspiration to all intelligence officers. Our thoughts are with Mike, Jeanine, & their family," Haspel wrote on Twitter.

He speaks often about issues of national security and has been critical of both the Obama and Trump administration, though reached far higher levels of public escalation with the current president and was on a list of national security officials Trump was threatening over their security clearances.