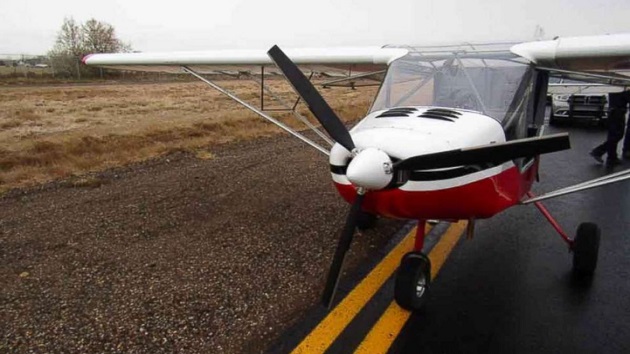 Uintah County Sheriffs Office(SALT LAKE CITY) — Two teenage boys allegedly stole, flew and landed a small plane in Utah, local authorities said, before they were taken into custody on Thanksgiving Day.
The boys, ages 14 and 15, were believed to have left a group home in north central Utah this week before heading to eastern Utah, where they were staying with friends in the Jensen area near the Colorado state line, the Uintah County Sheriff's Office said.
On Thursday morning the teens allegedly accessed a tractor and drove it to a private airstrip in Jensen, before stealing a fixed-wing, single-engine plane, according to the sheriff's office.
The plane was seen flying low along US-40, about 32 miles west of Jensen, the sheriff's office said.
Investigators believe the teens discussed flying back towards north central Utah, but decided to return to the Vernal Regional Airport near Jansen, the sheriff's office said.
The boys were arrested near the airport after they landed, the sheriff's office said. They were being held in the Split Mountain Youth Detention Center in Vernal as of Thursday afternoon.
Copyright © 2018, ABC Radio. All rights reserved.