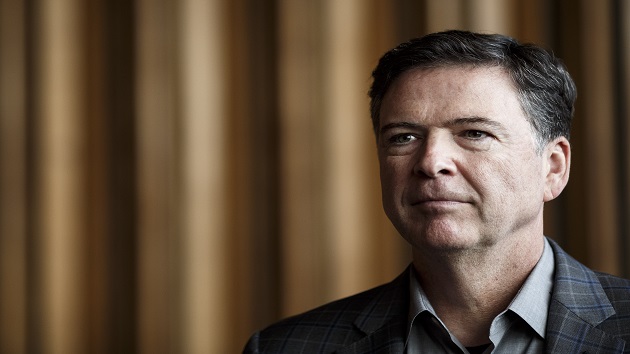 Carsten Koall/Getty Images(WASHINGTON) — Former FBI Director James Comey tweeted on Thanksgiving morning that he had received a subpoena to testify before Congress and he indicated that he would submit willingly to the formal, legally-binding summons if the proceedings were open and public.
“Happy Thanksgiving,” Comey wrote via Twitter. "Got a subpoena from House Republicans. I’m still happy to sit in the light and answer all questions. But I will resist a ‘closed door’ thing because I’ve seen enough of their selective leaking and distortion.”
With the clock winding down on their majority control in Congress, Republicans on the House Judiciary Committee indicated last week that they were preparing to subpoena Comey and former U.S. Attorney General Loretta Lynch for private depositions after the Thanksgiving holiday. Republicans have been preparing for those sessions to take place during the lame-duck session of this Congress before January, when the new members are sworn into office. Democrats will assume control of the committee and the majority in the House in the new year.
Outgoing House Judiciary Committee Chairman Bob Goodlatte provided notice of the pending subpoenas though the former Justice Department leaders have offered to testify voluntarily as part of the committee’s probe of allegations of political bias at the DOJ and the FBI.
Comey's attorney David N. Kelley expanded on the former FBI director's request for open hearing in a statement that said the subpoena for a "closed door interview" was a break from established norms.
"Mr. Comey embraces and welcomes a hearing open to the public, but the subpoena issued yesterday represents an abuse of process, a divergence from House rules and its presumption of transparency," the statement read in part. "Accordingly, Mr. Comey will resist in Court this abuse of process."
Comey was fired by Trump in May 2017, after a controversial tenure. Comey was criticized for his handling of former Secretary of State Hillary Clinton’s use of a private email server and the investigation into Russian meddling during the 2016 campaign.
Copyright © 2018, ABC Radio. All rights reserved.