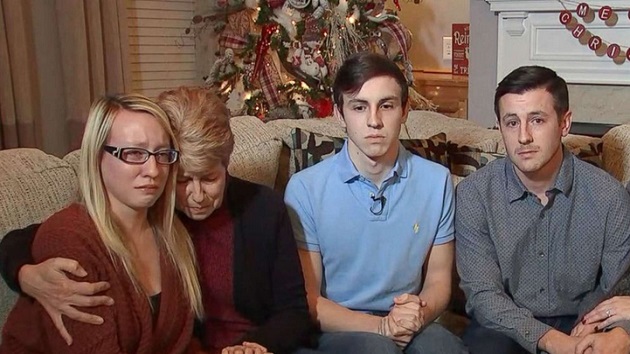 WRKN(NASHVILLE, Tenn.) — Loved ones of a Tennessee man killed when a slab of concrete tossed from an overpass crashed through his car windshield pleaded for any witnesses to contact police, saying they want justice.
As police in Nashville worked to identify the person responsible, Joe "Jody" Shelton Jr.'s family spoke out about losing the "foundation of our family" to what authorities suspect was a random act of violence.
"I want people to be aware of what happened to my father, but I also want justice for him, for our family," Shelton's son, Jacob Shelton, told ABC affiliate station WKRN-TV in Nashville. "He was a loving and kind soul that didn't deserve anything like this. We would like to find whoever did this, to know who took our father away from us prematurely, who murdered him."
Joe Shelton, 54, an employee at a Nissan plant in Smyrna, was driving to work on Interstate 24 in Nashville about 5 a.m. on Tuesday when a slab of concrete police say was thrown from an overpass crashed through his windshield, hit him in the face and killed him instantly.
Metropolitan Nashville Police Department investigators are trying to identify the culprit by combing through surveillance video from cameras in the area and asking anyone with information about the tragedy to come forward.
Jacob Shelton, a student at Ouachita Baptist University in Arkadelphia, Arkansas, spoke on behalf of his grieving mother, brother and sister as they sat together on a couch in the living room of their family home in Springfield, Tennessee, a Christmas tree and other holiday decorations behind them.
His said his father, who was nearing retirement, had taken the same route to work for 28 years and was an "extremely precautious" motorist who avoided driving next to 18-wheelers and other big trucks.
"My father always said that 'a poor man can't do anything but work,'" he said, adding that it was still hard to believe that his father died driving to work. "This was a random act of violence that could have happened to absolutely anyone."
He described his father at "optimistic, upbeat and hardworking."
"My father was the rock of our family. He was the foundation and he's someone we could all lean on. He was a great person all around and a joy to everyone that came to him," Jacob Shelton said.
He said he and his family would like to see Nashville city officials take steps to prevent a similar tragedy from occurring by increasing the height of fences and improving surveillance on overpasses.
"My father wouldn't want this to happen to anyone else," Jacob Shelton said. "He was a loving, kind soul and he would want Nashville to fix this, to protect its citizens, to protect the people that drive to work every day. You should be able to drive to work and not fear for your life."
Copyright © 2018, ABC Radio. All rights reserved.

Justice Department sues Roger Stone, wife for $2 million in unpaid taxes
8 killed in mass shooting at Indianapolis FedEx facility; suspect was former employee
Eight killed in FedEx shooting: Suspect had ‘no confrontation with anyone,’ police said
Family, fighter jets and flying cars: see the new trailer for ‘Fast and Furious 9’
Daniel Dae Kim reveals his ‘Lost’ character was supposed to be killed off in the first season
Officer who shot, killed Daunte Wright and Brooklyn Center police chief both resign