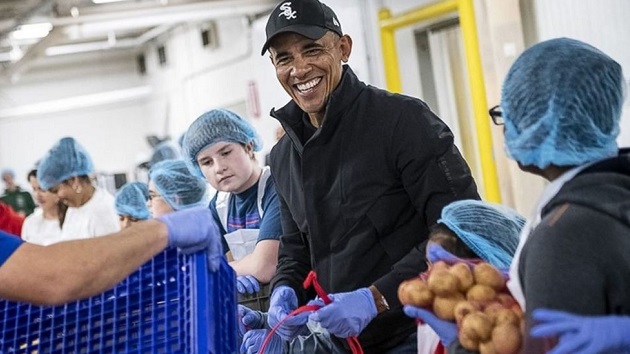 ABC News(CHICAGO) — Former President Barack Obama surprised a group of food bank volunteers in Chicago this week when he showed up to help prepare Thanksgiving meals for the city's needy.
"I am grateful for the next generation of leaders — the young people who are tolerant, creative, idealistic and doing the work to create the world as it should be. Who understand that hope requires action," Obama tweeted Wednesday. "From the Obama family to yours, Happy Thanksgiving."
Obama, who represented Illinois as a U.S. senator, shocked volunteers at the Greater Chicago Food Depository with an unannounced visit in an effort to give back, according to his charity organization, the Obama Foundation, which tweeted video of the jovial visit Wednesday afternoon.
Obama dished out hugs and handshakes as he entered the building, donning a black baseball cap, classic blue jeans and two large tote bags. He was in the area for the foundation's second annual summit, the foundation said.
"After joining young civic leaders at our second Summit in Chicago, President Obama spent some time at the Greater Chicago Food Depository to pack food for families in need across the Chicago area," the foundation said.
The Greater Chicago Food Depository also tweeted a video of the visit, along with a special "thank you" message to the former president.
"Thank you to @BarackObama and @ObamaFoundation for joining our volunteers today at the Food Depository," the organization tweeted. "We believe no one should go hungry, especially this time of year, and that's why we're working to address the root causes of hunger in Chicago and Cook County."
Copyright © 2018, ABC Radio. All rights reserved.