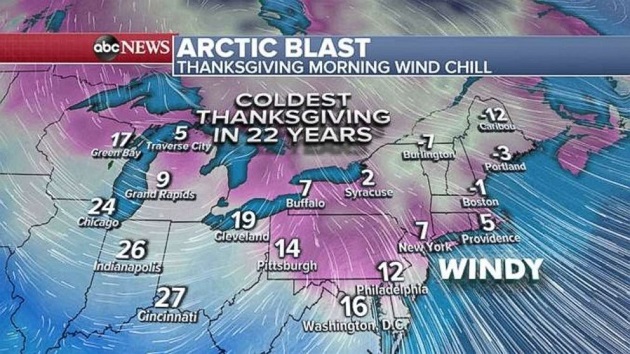 ABC News(NEW YORK) — Thursday will be the coldest Thanksgiving in decades for most of the Northeast, the result of an Arctic blast of air that's pushing temperatures 15 to 25 degrees colder than a year ago.
Even with a sunny sky forecast on Thursday, little warming is expected throughout the day. The last time it was this cold in the Northeast on Thanksgiving was 1996.
Friday morning may be even colder in some of those spots, with morning wind chills still in the single digits — or colder. Wind gusts in some of the major cities may reach 30 mph, adding to the chill. The high in Boston is expected to be 18 degrees; in New York, 27.
Temperatures should warm back up a bit over the weekend.
Along the West Coast, a storm system is delivering rain, which should aid in extinguishing the many wildfires that have ravaged California the last few weeks. Unfortunately, the precipitation also carries with it an increased risk of mudslides and debris flow. In higher elevations, snow is to be expected.
This storm is expected to slide inland and take a fair amount of snow — 1 to 2 feet — into parts of the Rockies later on Thursday.
A new storm is headed for the Pacific Northwest. More rain and snow are expected, from the Canadian border down into Northern California. Another storm is expected in California by Friday morning, with heavy snowfall expected in the southern Cascades.
Copyright © 2018, ABC Radio. All rights reserved.