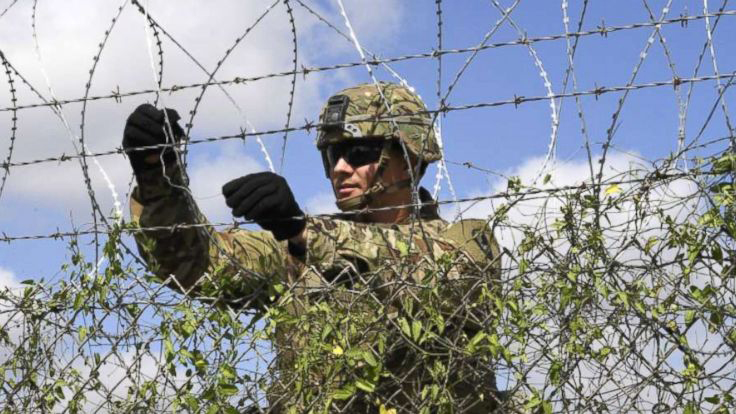 US Air Force(WASHINGTON) — The Trump White House has given the Pentagon new authorities to troops on the border to protect Customs and Border Protection (CBP) personnel if they are overwhelmed, including the use of lethal force, according to White House memo obtained by ABC News, sent by chief of staff John Kelly to Defense Secretary James Mattis.
Mattis told reporters Wednesday that Kelly, a retired Marine Corps general, was authorized to put out the memo because “he has the authority to do what the president tells him to do.”
But Mattis stressed that if CBP personnel were at risk of being overwhelmed, he envisions unarmed U.S. military personnel providing crowd control with plastic shields and batons.
Roughly 5,900 troops are currently in Texas, Arizona and California to support CBP ahead of the arrival of migrant caravans making their way through Mexico from Central America.
Those troops have laid concertina wire and concrete jersey walls at ports of entry along the border.
"The president did see the need to back up the Border Patrol," said Mattis. "We received late last night an additional instruction authorizing implementation (of)additional measures. We're sizing up what those are."
According to the White House memo issued Tuesday, military personnel on the border can protect federal personnel through "military protective activities that the Secretary of Defense determines are reasonably necessary to ensure the protection of Federal personnel."
That includes "a show or use of force (including lethal force, where necessary), crowd control, temporary detention, and cursory search" The memo reaffirms that "Defense personnel shall not, without further direction from the President, conduct traditional civilian law enforcement activities, such as arrest, search, and seizure in connection with the enforcement of the laws."
Mattis acknowledged to reporters that he now had the authority for lethal force to protect CBP personnel, but "there has been no call for any lethal force from DHS.
Asked by reporters what that protection might look like at ports of entry, Mattis replied "unarmed M.P.s with shields, batons, no firearms."
The majority of the 5,800 active duty troops along the border are unarmed. It is only military police units protecting those units that are armed.
The memo also allows for the "temporary detention" of migrants, but Mattis made clear that the military does not have "arrest authority" under the Posse Comitatus Act.
He said what he envisioned was temporarily holding migrants for "minutes" before being handed over to CPB to be arrested.
"If someone's beating on a Border Patrolman and if we were in position to have to do something about it, we could stop them from beating on them and take him over and deliver him to a Border Patrolman, who would then arrest him for it," said Mattis.
But the language used in the memo raised concerns in Congress that it edged close to the Posse Comitatus Act that prohibits active duty troops from carrying out law enforcement duties in the United States. Even from high-ranking Republican members of Congress like Rep. Mac Thornberry, the chairman of the House Armed Services Committee.
“Chairman Thornberry is eager to learn how this memo is consistent with the Posse Comitatus Act,” said a congressional staffer.
The defense secretary said that even though he has now been provided the new authority he would wait for further guidance from the Department of Homeland Security for future needs.
On Tuesday, the Pentagon announced that the cost of the border support mission would cost $72 million. Mattis described that figure as "an early estimated cost."
"I am confident that number will go up," he said.