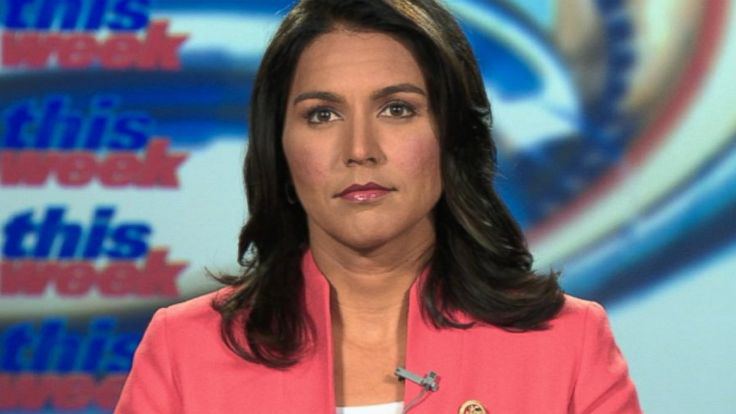 ABC News(WASHINGTON) — Amid bipartisan backlash to President Donald Trump's stunning statement Tuesday on the murder of Saudi journalist Jamal Khashoggi, defending Saudi Arabia community and saying for him "it's all about America First" and maintaining the U.S.-Saudi relationship, one newly-emboldened Democrat is lashing out at the president via his favorite medium, Twitter.
On Wednesday, Rep. Tulsi Gabbard, D-Hawaii, launched a Twitter grenade at the president, saying "Hey, @realDonaldTrump: being Saudi Arabia's bitch is not "America First."
On Tuesday, Trump issued a statement expressing uncertainty that Crown Prince Mohammad bin Salman had any knowledge of Khashoggi's murder. "Maybe he did — and maybe he didn't!," Trump said.
While Trump acknowledged there is still an ongoing investigation, he appeared to signal he is not ready to hold the young prince, known colloquially as MBS, accountable.
“[W]e may never know all of the facts surrounding the murder of Mr. Jamal Khashoggi. In any case, our relationship is with the Kingdom of Saudi Arabia,” Trump noted. “They have been a great ally in our very important fight against Iran. The United States intends to remain a steadfast partner of Saudi Arabia to ensure the interests of our country, Israel and all other partners in the region. It is our paramount goal to fully eliminate the threat of terrorism throughout the world!”
Gabbard, who just won re-election to her fourth term in the House of Representatives, has often clashed with Trump’s foreign policy, particularly in the Middle East.
Most notably, Gabbard has opposed U.S. efforts to remove Syrian President Bashar al-Assad from power. In 2017, Gabbard, who served as a field medic with the Hawaii Army National Guard in Iraq, traveled to Damascus and met with Assad, expressing skepticism that the dictator attacked his own people with chemical weapons.
After her tweet attacking the president, another veteran serving in Congress challenged Gabbard over her past support of Assad.
Gabbard has recently trained her sights on ending U.S. military support for Saudi Arabia's war against Houthis in Yemen – a civil war that has dragged on since 2015.
“Don’t be fooled: If Congress and this Administration truly were concerned about the plight of the Yemeni people and peace, all U.S. support for Saudi Arabia’s atrocities would end now,” Gabbard said during floor debate on the topic last week. “It is long overdue that we end U.S. complicity in Saudi Arabia’s atrocities. We must end all U.S. support for Saudi Arabia’s genocidal war in Yemen now.”