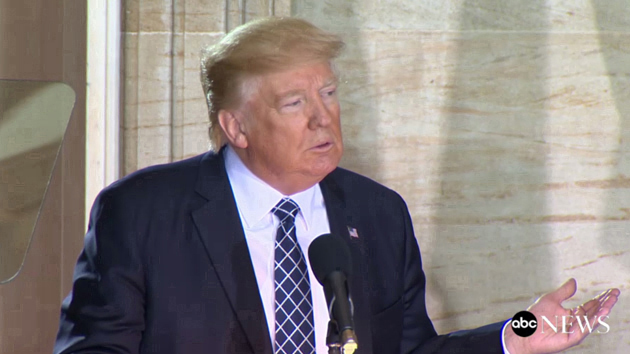 ABCNews.com(WASHINGTON) — The White House on Wednesday still had no comment on a report Tuesday in the New York Times that President Trump told then-White House counsel Donald McGahn this past spring that he wanted to order the Justice Department to prosecute his 2016 challenger Hillary Clinton as well as former FBI director James Comey.
The report has raised new questions about whether President Trump sought to use the traditionally independent Justice Department to go after his political enemies.
Previously, Trump has tweeted that then-Attorney General Jeff Sessions should "look into all the corruption on the 'other side'… including deleted Emails, Comey lies&leaks, Mueller conflicts, McCabe, McCabe, Strzok, Page, Ohr….. …FISA abuse, Christopher Steele & his phony and corrupt Dossier, the Clinton Foundation, illegal surveillance of Trump Campaign, Russian collusion by Dems – and so much more."
ABC News has not independently confirmed the Times story.
The Times reported that McGahn responded to Trump that he had no authority to order a prosecution and had White House lawyers write a legal memo for the president warning that such a move could have serious consequences, including possible impeachment.
“Mr. McGahn will not comment on his legal advice to the president,” McGahn’s attorney, William A. Burck said in a statement to ABC News. “Like any client, the president is entitled to confidentiality. Mr. McGahn would point out, though, that the president never, to his knowledge, ordered that anyone prosecute Hillary Clinton or James Comey.”
According to the Times, the president has continued to privately discuss pursuing the prosecutions, has asked about the possible appointment of a special counsel to investigate Clinton and Comey, and has even expressed disappointment in the current FBI director, Christopher Wray, reportedly calling him "weak" for not aggressively probing Clinton.
Trump made similar threats on the campaign trail, stating in an October 2016 debate with Clinton: "If I win I am going to instruct my attorney general to get a special prosecutor to look into your situation" adding she would be “in jail” if he were elected president, but he appeared to change course once he won.
"I don't want to hurt them. I don't want to hurt them. They're, they're good people," he said of Bill and Hillary Clinton in an interview with the CBS program "60 Minutes" in November 2016.
Since then, he has repeatedly suggested Clinton be investigated, including at a recent campaign rally in October, saying, "There was collusion between Hillary, the Democrats and Russia," as the crowd chanted, “Lock her up!”
According to the Times report, it remains unclear exactly what the president wanted to investigate regarding Comey. However, the president on Tuesday again took aim at Clinton when responding to questions about his daughter Ivanka’s use of a personal email to conduct government business as a senior White House adviser.
"Hillary Clinton deleted 33,000 e-mails, she had a server in the basement," the president told reporters.
There's also been bad blood between Trump and Comey since he fired him in May 2017.
"Who's lied more than Comey? Comey's lied a tremendous amount," Trump said in June. "What he did was horrible. Should he be locked up? Let somebody make that determination.”
Comey, who has compared Trump to a Mafia boss, calling him "untethered to truth" in his book released in April, responded on ABC's "Good Morning America."
"The president of the United States is calling for the imprisonment of a private citizen, as he's done for a whole lot of people who criticize him. That is not acceptable in this country," Comey said. "The president doesn't get to decide who goes to jail," Comey said.