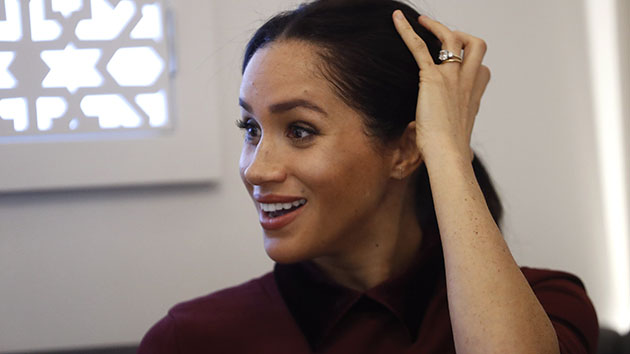 Chris Jackson/Getty Images(LONDON) — Meghan Markle stepped into the spotlight as Prince Harry's beautiful bride, and since their royal nuptials, the Duchess of Sussex has quickly adjusted into her new life, new role and new royal family.
ABC News takes an up-close look at Meghan Markle's royal beginnings as the Duchess of Sussex in a prime-time special "Meghan's New Life: The Real Princess Diaries,", which airs Thursday, Nov. 22 9:00 p.m. EST on ABC Television Network.
In the first six months of her marriage, Markle has become a formidable force.
ABC royal contributor Imogen Lloyd Weber said that Queen Elizabeth II already sees Markle as a catalyst for the future.
"The Queen is incredibly smart. The Queen sees Meghan as a very, I want to say, [a] useful tool in securing and symbolizing the future of the monarchy for decades to come," she said.
In her short time as part of the royal family, the Duchess of Sussex has already proved to be a natural at getting involved with the British people.
Duncan Lacrombe, a former UK based royal editor and author of "Prince Harry: The Inside Story," said she's just "what the British public needed."
"Meghan's exactly what not only Harry needed, not only what the Royal family needed, but what the British public needed and longed for as well," he said.
She has blazed a new trail in the monarchy as an outspoken feminist and humanitarian.
ABC royal contributor Omid Scobie said he's already seen firsthand how the duchess does things differently than most royals, such as writing her own speeches.
"When she gave one of her first speeches in Fiji, she had notes with her that all had handwritten scribbles on it before she went up. And I asked a palace aid, 'Has she written this herself?' Because that's quite unusual for the royals, there's usually other people [that write it]. And they said, 'This was all her. She's been up for days working on this speech,'" Scobie said.
Vogue contributing editor Michelle Ruiz agreed that Markle is already "shaking" things up and called her "the feminist princess of our dreams."
"And for Americans, we sort of take pride in that, because we say, 'Look, there's our American girl over there shaking up the monarchy,'" Ruiz said.
Harry and Meghan's fairytale romance has captivated the attention of many.
"When you look at the Duke and Duchess of Sussex, there is an enormous electricity between them," ABC royal commentator Alastair Bruce said.
Sky News host June Sarpong agreed.
"If ever there was a fairytale it's those two. Their love just exudes," Sarpong said.
Larcombe said in his eyes, the pair has "become the Duke and Duchess of Cuddles."
And their love has brought the wonderful news of a royal baby.
Since the early October announcement from Kensington Palace, the Duchess of Sussex has made her pregnancy look glamorous.
And her fashion influence has been undeniably powerful, much like that of her sister-in-law, Kate, the Duchess of Cambridge.
"When Kate wears something, it sells out instantly. Now we have the Meghan effect," royal expert Emily Nash said.
British novelist and TV producer Daisy Goodwin said that the "Markle sparkle" has actually outshone Kate's influence.
"I think the Meghan effect is even bigger than the Kate effect," Goodwin said.
But lately, all eyes are focused on the duke and duchess as they prepare to welcome their first child.
ABC royals contributor Victoria Murphy said the biracial baby will be breaking barriers.
"There is excitement and interest in the fact that this baby will be the first biracial baby that is born into the royal family. This is a family that, for centuries, has been made up predominantly of white Europeans," Murphy said.
Sarpong said the history behind the child's lineage is "powerful."
"Here you have this child who has ancestors who are British royalty and American slaves," Sarpong said. "How powerful."
CNN royal commentator Victoria Arbiter said that for now, the royal parents to be "don't want a title for their baby."
Weber explained that could mean a different life for the baby.
"As a result, this baby's unlikely to ever have his or her royal highness, prince or princess title. And they will be expected to work for a living," Weber said.
"Meghan's New Life: The Real Princess Diaries" airs Thursday, Nov. 22 9:00 p.m. EST on ABC Television Network.

‘Live in Front of a Studio Audience’ returns with lighthearted take on ‘Facts of Life’ and ‘Diff’rent Strokes’
Jon Stewart joins ABC’s ‘Live in Front of a Studio Audience: ”The Facts of Life”
See a life-sized house made of candy come to life on Hulu’s ‘Candified: Home for the Holidays’
“It’s the moment I’ve waited for my entire life”: Michael B. Jordan takes the reins of his career, and ‘Creed III’
Roe v. Wade on the line as Supreme Court takes up Mississippi abortion rights case
Michael K. Williams’ final documentary project, ‘Black Market,’ returning in January