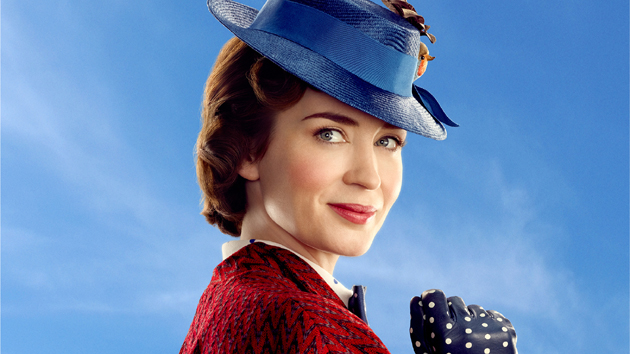 Disney(NEW YORK) — Mary Poppins, the magical whimsical nanny, is back on Cherry Tree Lane after 54 years in the sequel Mary Poppins Returns, starring Emily Blunt. The actress remembers the life-changing phone call she got from director Rob Marshall, asking her to play the iconic character.

“It felt like he was sort of proposing to me,” Blunt told ABC News in an interview for the upcoming special Mary Poppins Returns: Behind the Magic. “I just felt my hair sort of blowback with a combination of panic and joy.”

Blunt readily accepted the part but wanted to make the character her own. So instead of re-watching the 1964 movie she went back to the source material — the eight Mary Poppins books written by P.L. Travers.

"She's quite different in the books from what I remember from the film,” Blunt said of the iconic nanny. “She's completely eccentric and batty and funny and so rude. You know, deliciously rude and vain.”

Blunt’s Mary Poppins has one of the most spectacular entrances in recent cinema. Though she looks like she’s floating out the sky, in reality, Blunt was dangling 50 feet in the air, hanging from a crane. Blunt says, “ I mean, I was a bit terrified, to be honest.”

Marshall remembers shooting the scene, telling ABC, “That was a tough one for her. Emily was scared out of her mind up there, because there was — there were no nets.”

Marshall’s direction helped calm Blunt. He recalls telling the actress, “I said, "Just remember Emily, it's not you coming in. It's Mary Poppins coming in."

See a life-sized house made of candy come to life on Hulu’s ‘Candified: Home for the Holidays’
Stoning in the Deep: Seth Rogen admits he got a little too high for Adele’s concert
World AIDS Day: A time for remembrance, a time for hope
As concerns over omicron variant grow, experts say don’t wait to get a booster
‘The Bachelorette’ recap: Hometowns week ends with a devastating elimination
Taraji P. Henson preps for ‘Annie Live!’, Kevin Hart makes it a merry holiday for youth, and more