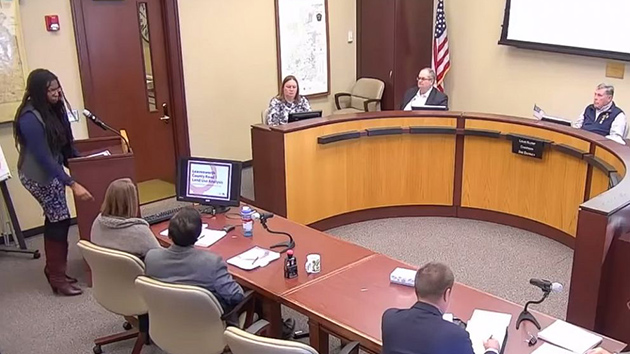 Leavenworth County Board of County Commissioners
Posted on November 21, 2018 by ABC News

Leavenworth County Board of County Commissioners(KANSAS CITY, Kan.) — A white Kansas county commissioner has resigned after coming under fire for telling an African-American consultant at a public meeting that he was "part of the master race."
Louis Klemp, 80, resigned Tuesday from the Leavenworth County Board of Commissioners, writing in a letter that "I regret my recent comment."
Klemp's resignation letter was read during a commission meeting on Tuesday and was immediately accepted by the board.
"Mr. Klemp has done the right thing," Commissioner Doug Smith said during the meeting. "This is a good example that the choice of words does matter. I hope the young lady involved will accept our apology and will not hesitate to help Leavenworth County on future projects."
During a public meeting on Nov. 13, Triveece Penelton, a consultant for VIREO Planning Associates in Kansas City, was making a presentation to the board of commissioners about community engagement on a potential development of rural land in Tonganoxie, Kansas.
In a video of the meeting, posted on the Leavenworth County Board of Commissioners' YouTube channel, Klemp expressed his displeasure with a plan to develop the land as residential. He said he favored an industrial development that would return revenue to the county.
Speaking directly to Penelton, Klemp said, "I don't want you to think I'm picking on you because we're part of the master race. You know you got a gap in your teeth. You're the masters. Don't ever forget that."
Klemp did not explain what he meant by the comment.
In his resignation letter, Klemp said his comment was "misinterpreted" and that he was trying to find common ground with Penelton by pointing out they both had gaps in their teeth.
"My attempts at identifying a similarity, space between our teeth, with the presenter were well-meaning," he wrote in his letter.
The term "master race" stems from Nazi terminology, often describing Adolf Hitler's belief in a superior Aryan race.
But Klemp said in his letter that his use of the phrase was "definitely not racially motivated." He also said he contacted Penelton to extend "my regret and support."
Klemp's controversial comment immediately sparked a backlash and prompted Kansas Gov. Jeff Colyer to demand his resignation.
"Racial and discriminative language have no place in our society, and most especially when spoken by someone holding a public office," Colyer said in a statement. "The inappropriate remarks made by Leavenworth County Commissioner Louis Klemp are unacceptable and do not reflect the values of the county which he represents."
The Leavenworth City Commission held a special meeting on Thursday and issued a statement condemning Klemp's remark and asked that he apologize and step down.
Copyright © 2018, ABC Radio. All rights reserved.