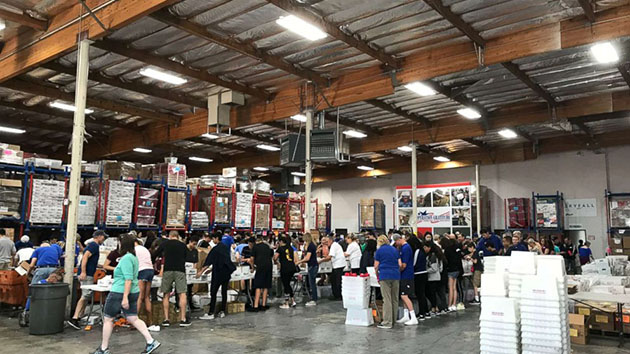 Jason Nathanson/ABC(LOS ANGELES) — The day after the Sept. 11, 2001 terror attacks, then-46-year-old Carolyn Blashek tried to enlist in the military.
"I just thought, 'We’re at war,'" Blashek recalled, telling ABC Radio she was thinking about her teenagers at the time.
"I want to be the one to serve," she explained. "I don’t want it to fall on their shoulders."
She had no military experience, and she said no branch wanted her. She was told she was too old, so she searched for volunteer opportunities and could only find one: The Bob Hope USO at LAX, located at Los Angeles International Airport, where military members preparing to ship out or returning home could have access to phones, computers, bathrooms and food.
After a year and a half of feeling like she was making a tiny bit of difference, Blashek was brought to tears by one service member who came in asking for a chaplain.
“He was on emergency leave to bury his mother,” she said. “His wife had left him, and his only child had died as an infant.
"He had no one in his life," she continued. "And he said to me, 'For the first time in my 20-year career, I'm going back to a war. I know I'm not going to make it home this time, but it doesn’t matter because no one would care.'"
Blashek says she tried to help him, but she wasn't sure she actually did.
When he left, she fell apart.
"I just was sobbing, thinking, 'You know, I have to do more than just serve hot dogs,'" she said.
While trying to figure out what more she could do, she remembered that she used to send her kids care packages when they would go away to summer camp on the East Coast. Like a bolt of lightning, she thought, "Why not send care packages to military members?"
And that’s how Operation Gratitude was born.
Originally headquartered in her home in Los Angeles’s San Fernando Valley, Blashek set about collecting snacks, games, toiletries — anything she thought would give some comfort to someone far from home in a war zone. She also included a personalized letter in each care package, thanking the recipient for his or her service.
But in those first few post-9/11 years of terrorism and anthrax scares, you couldn't send a package to the front lines without addressing it to someone serving. And that was an issue.
"I didn't know anybody in the military," she said. "So that became another journey of trying to collect names and addresses."
Quickly though, and at a time when things didn't yet go viral, word spread. Blashek was flooded with not only names, but donations of sunscreen and socks and other supplies.
She said her living room was packed to the rafters with boxes, but she wasn't allowed to send just anything.
"No alcohol," she said. "No pork products because most of these packages were going into majority Muslim countries. No overtly religious materials. And no pornography."
One day she heard about a shipment of sunscreen someone had donated, just sitting at an armory near her home. So she showed up and knocked on the door. It wasn’t long before she moved her whole operation from her house to the armory and started recruiting volunteers to help stuff boxes.
Now, Operation Gratitude is a non-profit company with a chief executive officer (CEO) and a couple dozen employees, which to date has sent more than 2.1 million packages to military members, their families and veterans.
"We all assume that everybody's got a family and loved ones that send them letters and packages," Vietnam veteran Bob Donavan said at a recent Operation Gratitude volunteer day.
"It's not so. They really don’t."
And when service members get those Operation Gratitude packages, he said there’s one thing that’s more important that the snacks and socks.
"When you get that letter, and I can tell you from speaking to a lot of people that have come back out of the combat zones, it's either in their breast pocket over their heart, or in their helmet. That's how much that little letter means," he added.
Operation Gratitude has since expanded their scope, now sending packages domestically to first responders as well as deployed military members.
There are such volunteer days all over the country, where hundreds of people donate their time, stuffing boxes, stuffing bears for military children and coming together.
People of all economic backgrounds, races, "and most significantly, of all political viewpoints," said Blashek.
"From the far left to the far right, and everybody is joined in common cause to say thank you."
This story will be featured in ABC Radio's three-hour special, "America Gives Thanks," airing on ABC Radio affiliates across the country on Thanksgiving Day, Thursday, Nov. 22.
Copyright © 2018, ABC Radio. All rights reserved.