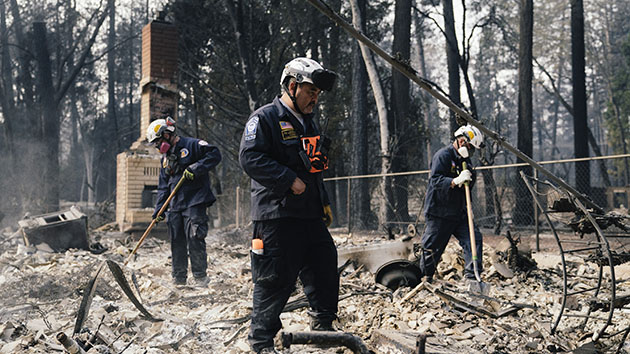 Mason Trinca for The Washington Post via Getty Images
Posted on November 21, 2018 by ABC News

Mason Trinca for The Washington Post via Getty Images(PARADISE, Calif.) — Heavy rain is forecast in parts of California on Wednesday, potentially triggering flash floods, debris flows or mudslides in areas where wildfires recently killed more than 80 people and destroyed nearly 17,000 structures.
At least 870 people still were unaccounted in the wake of wildfires that have scorched nearly 400 square miles of land across the Golden State, according to the California Department of Forestry and Fire Protection.
Brian Ferreira, a rescue squad officer for California Task Force 4, said the heavy rain could wash away potential "remains, or cremains," and impede the search for victims. His team and other rescue crews across the state are racing to get as much done as possible before rain starts falling later today, likely continuing the next few days.
"When the rain comes, [it's] going to consolidate the material and make it more dense and pack it down. And it's going to present much more like soil," Ferreira told reporters on the ground Wednesday. "So anything we find or hope to find that's still there, it's gonna make a difficult task just that much more difficult."
"We're going to go as hard as we can, as long as we can, until we can't go anymore," he added. "That's what's going to happen."
The worst of the rain systems could hit Paradise, a town virtually wiped out by wildfire, with as much as 5 inches of rain through Friday.
The rain is good news, overall, according to meteorologists, because it will boost air quality and lower the risk of new fires igniting this winter, but it likely will bring isolated mudslides and flash flooding to areas devastated by wildfires.
A flash flood watch is in effect Wednesday through Friday for several areas in Northern California, including Butte County, where the Camp Fire left 81 dead — making it the deadliest and most destructive wildland fire in state history.
"Properties impacted by the wildfires, and downstream of those areas, are at risk for flash flooding, mudflows and debris flows during periods of intense rainfall," Butte County officials warned residents earlier this week. "Wildfires can alter the terrain and soil conditions reducing the capacity for the ground to absorb water creating conditions for these types of hazards."
The National Weather Service also warned residents in low-lying areas of Butte County to prepare for possible road problems and potential evacuations due to flooding, falling rocks or debris flows during or after this stretch of precipitation.
Rain also is forecast in parts of Southern California, including where the Woolsey Fire killed at least three people and scorched more than 96,000 acres.
Copyright © 2018, ABC Radio. All rights reserved.