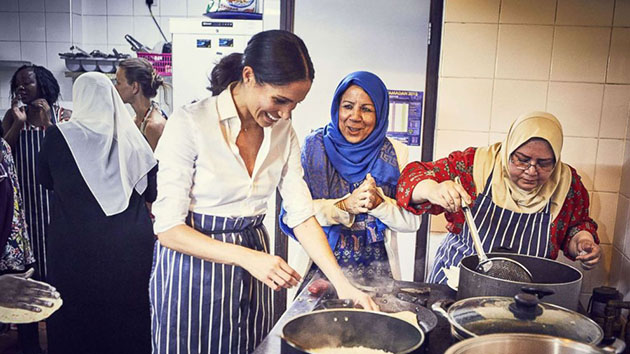 Jenny Zarins via Getty Images(LONDON) — Meghan Markle, the Duchess of Sussex, visited the Hubb Community Kitchen in West London today and helped prepare meals with a group of female survivors of the deadly Grenfell Tower fire, two months after partnering on a charity cookbook.

The Duchess of Sussex is supporting a new charity cookbook, 'Together: Our Community Cookbook', which celebrates the power of cooking to bring communities together. #CookTogether pic.twitter.com/XEclxgQjR4

The Duchess of Sussex, 37, collaborated with the women on a cookbook, "Together: Our Community Cookbook,” to help raise funds to keep the Hubb Community Kitchen open up to seven days a week and to expand its reach in the community. In the fire's aftermath, the community gathered at the kitchen of Al Manaar Muslim Cultural Heritage Center to prepare food for their families. (Hubb means love in Arabic.)

The women are now able to use the kitchen seven days a week, and have been empowered to gain qualifications and start their own new projects helping others in their community to benefit from the kitchen. #CookTogether pic.twitter.com/KE0kClF1At

The profits from the cookbook's sales were used to renovate a community kitchen that the women will use to prepare meals for their families and neighbors.
Now, the women will be able to prepare 200 meals in just one day, according to Kensington Palace. The meals will be delivered to local groups in the community.

United by their passion for food and cooking as a way of strengthening communities, The Duchess of Sussex and the women of the Hubb Community Kitchen are pleased to share 'Together: Our Community Cookbook' #CookTogether pic.twitter.com/RSFD7ChD9E

Meghan wore a Club Monaco maroon coat and a matching maroon dress with a velvet point collar.
Once inside, Meghan reunited with the women in the newly-revamped space and got to work in the kitchen. Wearing disposable gloves and apron, Meghan and the women worked together to prepare fresh meals that will be delivered daily to the homeless and to women's shelters, according to Kensington Palace.
'More than a cookbook'

Meghan personally wrote the forward for the cookbook, which quickly became a bestseller when it was released in September. She described the project as a labor of love and something that brought the women together after last year's fire.
“Together is more than a cookbook," she wrote. "This is a tale of friendship, and a story of togetherness. It is a homage to the power of cooking as a community, and the recipes that allow us to connect, share and look forward.”
The Duchess of Sussex first visited the kitchen in January 2018 and has continued to make regular private visits to the kitchen.
"I immediately felt connected to this community kitchen; it is a place for women to laugh, grieve, cry and cook together," Meghan wrote in the foreword.
"Melding cultural identities under a shared roof, it creates a space to feel a sense of normalcy – in its simplest form, the universal need to connect, nurture, and commune through food, through crisis or joy –- something we can all relate to," she wrote. "Through this charitable endeavour, the proceeds will allow the kitchen to thrive and keep the global spirit of community alive."
Copyright © 2018, ABC Radio. All rights reserved.