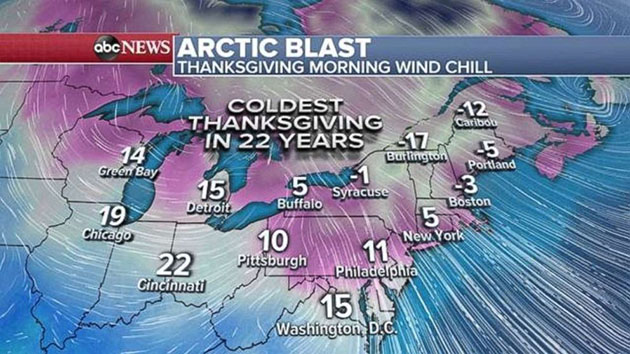 ABC News(NEW YORK) — A major cold blast is moving into the Northeast just in time for Thanksgiving morning. Several daily record lows and record-low highs are expected to be broken with temperatures 20 to 35 degrees below normal.
Wind chills on Thursday morning across the Northeast will be brutal -– in the teens from Washington, D.C., to Philadelphia, the single digits for New York City, and below zero for Boston and much of New England.
Throughout the day on Thanksgiving don’t expect it to warm up much at all. Temperatures in Philadelphia, New York City and Boston will stay below the freezing mark — with the wind chill feeling more like the middle of winter than November.
In fact, some of these temperatures are even colder than average temperatures in January.
This will be the coldest Thanksgiving since 1996 across the Northeast, while some cities could get close to the coldest Thanksgiving on record.
Boston's forecast high is 21 degrees on Thursday, which means it will likely break the record for coldest Thanksgiving ever: 24 degrees set in 1901.
New York City's forecast high is 27 degrees, which may not break the record for coldest Thanksgiving, but will likely be in the top 3. Philadelphia's forecast high is 30 degrees, and the record for coldest Thanksgiving is 27 degrees.
Snow squalls are possible for western New York and Pennsylvania on Wednesday as an advancing cold front brings lake effect snow across the area. Winter weather advisories are in effect from Buffalo to Watertown.
Only minor accumulations are expected, but any whiteout conditions and slick roads will result in hazardous travel.
Much of the country is looking dry and quiet for one of the biggest travel days of the year on Wednesday.
Sunshine and seasonable temperatures stretch from the Southwest all the way to the East Coast,
There are no major storms to speak of, but there are a few trouble spots: rain along the West Coast, a few showers along the Gulf Coast and the lake effect snow in the Northeast.
Copyright © 2018, ABC Radio. All rights reserved.

‘Encanto’ delights with a box office-topping $40.3 million Thanksgiving weekend debut
Homicide record broken in Louisville with 2 slayings, including a teenager killed on Thanksgiving Day
Thanksgiving: schools, banks, mail, most stores closed
Thanksgiving expected to be busiest travel holiday of 2021 so far
CISA, FBI recommend vigilance online to ward off ransomware attacks around Thanksgiving
Nearly 200,000 Californians could be without power on Thanksgiving