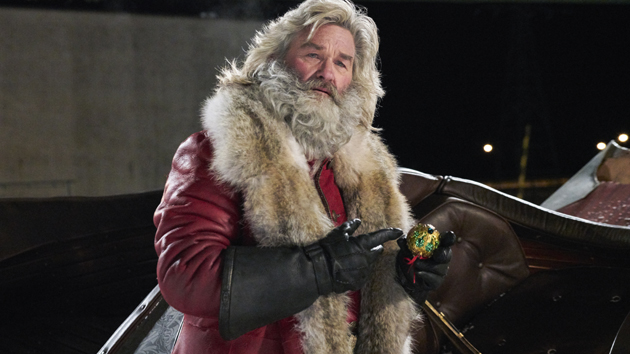 Kurt Russell in "The Christmas Chronicles"; Michael Gibson/Netflix(NEW YORK) — We’re days away from Thanksgiving, which means you’ve probably already got your feasting arrangements all sorted. But what to do when you’re not stuffing your bird, or your face? Here are a few suggestions of some holiday week entertainment you can check out.

How about a cooking show to give you some kitchen inspiration? Netflix releases the culinary competition The Final Table today, in which a team of chefs create meals from countries all over the globe.

Three big movies are opening in wide release today. First up: Michael B. Jordan and Sylvester Stallone are back for Creed II, the sequel to the 2015 hit set in the Rocky universe. This time, Jordan’s Adonis Creed fights Victor Drago, son of Ivan Drago, the Russian boxer who killed Creed’s father, Apollo.

Looking for something more family-friendly? The animated Ralph Breaks the Internet has voice talents Sarah Silverman and John C. Reilly returning for the sequel to the 2012 box office hit.

If you’re an action fan, you can check out Kingsman star Taron Edgerton in the title role opposite Jamie Foxx in the PG-13 Robin Hood.

Happy Thanksgiving! As you prep your turkey, tune into the annual Macy's Thanksgiving Day Parade, which begins at 9 a.m. across all time zones on NBC.

For some, it's not too early to start thinking about Christmas. If that’s you, Netflix is rolling out The Christmas Chronicles, a film starring Kurt Russell as a no-nonsense version of St. Nick.

And expanding to more theaters today is The Front Runner, starring Hugh Jackman and inspired by the personal scandal that derailed Sen. Gary Hart’s bid for the 1988 Democratic presidential nomination.