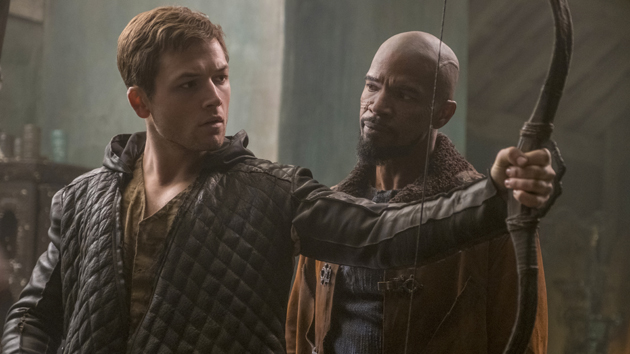 Larry Horricks/Lionsgate(NEW YORK) — Taron Egerton and Jamie Foxx are teaming up for the new action flick Robin Hood, a film that puts a “modern twist” on the classic tale of the hooded crusader who steals from the rich to give to the poor.

Egerton plays the title character and Foxx plays Little John, a mentor figure who trains Robin to reach his full potential so they can both take down the evil Sheriff of Nottingham.

“It’s weird for me coming from a small town in Wales, this idea of Jamie Foxx is so far-flung and kind of otherworldly,” Egerton tells ABC Radio of getting to work with Foxx. “So to now be splitting the bill with him on a big movie is very surreal. I’ll never get used to that, I don’t think.”

Working together, Egerton found he actually had a lot in common with Foxx — namely, their shared love of music.

“We spent a lot of time singing together,” Egerton says. “Obviously he’s an amazing musician as well as a brilliant actor, and I sing a little bit as well. So yes, we would kind of spontaneously burst out into song on set as a way of passing time in between set-ups, in between takes.”

Edgerton sings more than "a little bit." He playsElton John, and does all his own singing, in the upcoming Rocketman. And Foxx, of course, won an Oscar for playing iconic musician Ray Charles in the 2004 movie Ray.