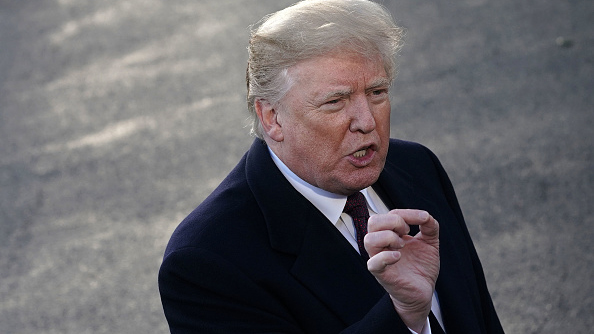 Alex Wong/Getty Images(WASHINGTON) — President Donald Trump on Tuesday angrily criticized a federal judge's ruling that blocks new restrictions on asylum that he announced earlier this month, calling the court "not fair" and predicting he would win in the Supreme Court.
He blasted the judge as an "Obama appointee" and then once again lit into the 9th Circuit Court of Appeals, the judges who would consider an administration appeal pf the district judge's order.
"The 9th Circuit is something we have to take a look at because it is not fair," Trump said. The appeals court, which has jurisdiction over a swath of California, has previously ruled against the Trump administration on a number of immigration policies.
"People should not be allowed to immediately run to this very friendly circuit and file their case — and you people know better than anybody what is happening is a disgrace, in my opinion, it is a disgrace what happens with the 9th Circuit. We will win that case in the Supreme Court of the United States," Trump said.
The president's travel ban for majority-Muslim countries was blocked by judges in the 9th Circuit, but the Supreme Court later ruled the action was within the president's authority.
On Tuesday afternoon, Trump called the court a "disgrace" and said he intended to put in a "major complaint."
The federal judge's order on Monday blocking the U.S. government from enforcing a ban on asylum seekers at the U.S. border came after Trump's proclamation earlier this month that sought to bar asylum for immigrants who did not enter at designated ports of entry.
Northern California U.S. District Judge Jon Tigar ruled that the president's proclamation goes against the "expressed intent of Congress" and "irreconcilably conflicts" with the Immigration and Naturalization Act, a 1951 law that "deals with one of the oldest and most important themes in our Nation's history: welcoming homeless refugees to our shores." The law states that migrants crossing the border at any point can ask for asylum.
"Whatever the scope of the President's authority, he may not rewrite the immigration laws to impose a condition that Congress has expressly forbidden," Tigar wrote in the ruling. Tigar was appointed to the federal bench by former President Barack Obama in 2012.
As part of the Immigration and Naturalization Act, Congress "clearly commanded … that any alien who arrives in the United States, irrespective of that alien's status, may apply for asylum — 'whether or not at a designated port of arrival,'" Tigar wrote, citing the law.
The president's proclamation on Nov. 9 attempted to limit asylum to immigrants who crossed at designated ports of entry and deny asylum to those who entered at other locations along the 2,000-mile southern border.
Immigration advocacy groups filed suit against Trump immediately after he signed the proclamation.
"At this very moment, massive numbers of aliens are arriving at our southern border, threatening to incapacitate our already overwhelmed immigration system," White House press secretary Sarah Sanders said in a statement.
"Yet now, a single district judge has issued a nationwide temporary restraining order preventing the executive branch from performing its Constitutional duty to enforce our borders and control entry into the United States. This decision will open the floodgates, inviting countless illegal aliens to pour into our country on the American taxpayer’s dime," Sanders said.