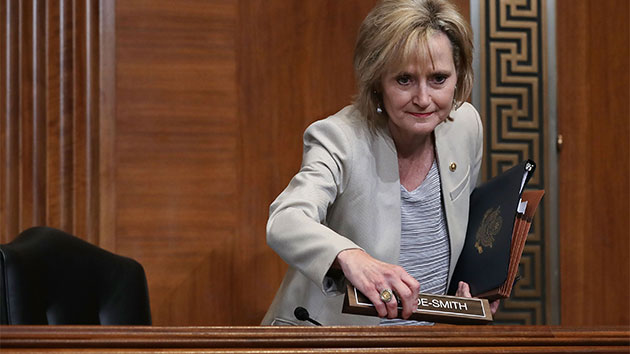 Chip Somodevilla/Getty Images(NEW YORK) — The pharmaceutical giant Pfizer is one of several big-name companies calling on Mississippi Republican Sen. Cindy Hyde-Smith to return their campaign donations after a video surfaced on social media in which she talks about attending a "public hanging."

Hyde-Smith is in a tight runoff election race with Democrat Mike Espy, a former congressman who would be the state's first African-American senator since the 1800s.

“We condemn racism and bigotry in all its forms,” Pfizer spokesperson Sharon Castillo told ABC News Tuesday. “We are withdrawing our support and have requested a full refund of our contributions, which were made months in advance of the senator’s comments.”

Pfizer has made two contributions totaling $5,000.

The video in question shows Hyde-Smith in Tupelo, Mississippi, embracing a supporter and saying, "If he invited me to a public hanging, I'd be on the front row."

After the video was posted on Twitter, Hyde-Smith did not apologize but defended herself.

"In a comment on Nov. 2, I referred to accepting an invitation to a speaking engagement," she said in a statement. "In referencing the one who invited me, I used an exaggerated expression of regard, and any attempt to turn this into a negative connotation is ridiculous."

When actress Debra Messing’s criticized Walmart for its donation to Hyde-Smith, the company responded that the senator’s comments “clearly do not reflect the values of our company and associates.”

Walmart requested a full refund of $4,000 Tuesday, according to a company spokesperson.
Other companies, including AT&T, Leidos and Boston Scientific, have requested refunds of $2,000, $5,000 and $2,500, respectively.

Four days after the first video surfaced, another video from Nov. 3 was tweeted in which Hyde-Smith tells a group of supporters in Starkville, Mississippi, that it would be a “great idea” to make voting “just a little more difficult” for “liberal folks.”

Hyde-Smith’s campaign once again refused to apologize and released a statement saying, "Obviously Sen. Hyde-Smith was making a joke and clearly the video was selectively edited."

Hyde-Smith, appointed by Gov. Phil Bryant, is facing the runoff with Espy after she netted 41.4 percent of the vote on Election Day while Espy had 40.6 percent.