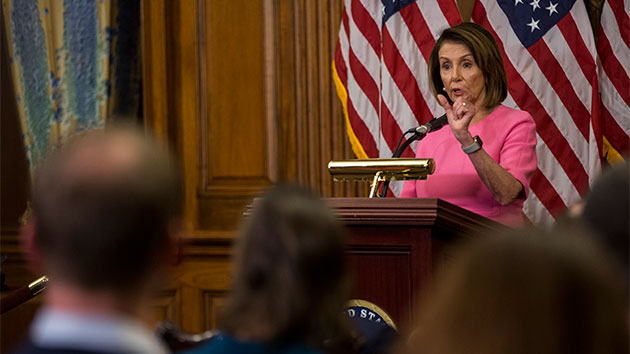 Zach Gibson/Getty Images(WASHINGTON) — Nancy Pelosi has cut a deal with Rep. Marcia Fudge, who was mulling her own challenge for the House speakership, winning over the Ohio Democrat as she locks in support for House Speaker.

Despite a band of House Democrats announcing their opposition Monday to Pelosi's bid for speaker, Pelosi has remained confident she will win the race for speaker, working behind the scenes to solidify support in the House Democratic Caucus in the aftermath of the midterm elections.

In an unexpected development Tuesday evening, Fudge threw her support behind Pelosi after she announced her intention to restore the Elections Subcommittee of the Committee on House Administration in the 116th Congress and name Fudge the new chair.

“Throughout her 20 years of public service, Congresswoman Marcia Fudge has been a relentless advocate for the right of every citizen to vote, and for all votes to be counted as cast," Pelosi, D-Calif., stated. “I look forward to working with Chairwoman Fudge in this new role as we advance our efforts to offer all Americans a Better Deal for Our Democracy.”

Fudge, a veteran Ohio Democrat, last week openly called for a challenger to step up and face off against Pelosi. Though she flirted with the idea of taking on Pelosi herself, she emphasized that she was looking for someone else to step forward.

“Last week I announced that I was strongly considering a run for Speaker of the House. My consideration was due in large part to the lack of sustained efforts that ensure diversity, equity, and inclusion at all levels of the House," Fudge wrote in a statement Tuesday.

Fudge noted that she will work to reinstate and reform protections of the Voting Rights Act in her new post – giving her enough incentive to support Pelosi.

"I am now confident that we will move forward together and that the 116th Congress will be a Congress of which we can all be proud," Fudge stated. "I now join my colleagues in support of the leadership team of Pelosi, Hoyer, and Clyburn."

On Monday, 16 House Democrats and members-elect released a letter announcing their opposition to Pelosi as House Speaker. Despite her expressed opposition last week, Fudge did not sign the letter.

If all 435 members of the next Congress vote in the election for Speaker, Pelosi must lock in 218 votes to win. Democrats are on track to hold at least 233 seats in the next Congress, according to ABC News' projections, so she can only afford to lose 15 of her Democratic colleagues. One House race, Utah's 4th Congressional District, remains too close to call, though the Democrat there, Ben McAdams, has pledged to oppose Pelosi for Speaker.