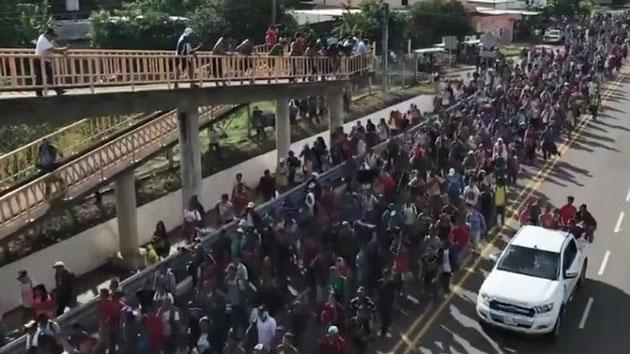 ABC News(WASHINGTON) — The Army might shift some of its troops along the border to California where caravans of migrants seeking asylum have gathered in Tijuana, Mexico across the border from San Diego, but clarified that no timelines have been determined for the possibility that some troops could leave the border ahead of the mission's scheduled end on Dec. 15.
"We are continually assessing our resources and refining requirements in close coordination with the Department of Homeland Security," according to a U.S. Army North statement.
The Army command, headed by Lt. Gen. Jay Buchanan, is overseeing the deployment of 5,800 active-duty military personnel to the border in support of Customs and Border Protection as it prepares for the arrival of several migrant caravans making their way through Mexico from Central America.
"We may shift some forces to other areas of the border to engineering support missions in California and other areas," according to the statement.
A significant number of the 5,800 active-duty troops assigned to the border support mission were sent to Texas because it was a shorter distance for the migrant caravans to travel compared to California.
But the first of the migrant caravan has headed west instead with up to 3,000 migrants now in Tijuana, across the border from San Diego, where they are waiting to make their way to a port of entry to seek asylum.
The Army statement suggests some of the 2,800 troops assigned to Texas or the 1,500 in Arizona could be moved to California to provide more logistical support to CBP.
The statement was prompted by a news report that indicated Buchanan had suggested in an interview that some of engineering units involved in building up the new military facilities along the border could leave the border in coming days, ahead of the scheduled end date.
"No specific timeline for redeployment has been determined," the statement continued. "We will provide more details as they become available."
Redeployment is the military term for when troops have completed their mission and return to their home base.
The active-duty troops are currently serving in Texas, Arizona and California as part of a mission to provide engineering, logistical and transportation support to CBP.
On Tuesday, the White House is expected to announce new authorities that would allow active-duty troops to protect CBP personnel from a threat, according to a U.S. official.
Currently, the troops serving on the border may act in self-defense, but they do not have the authority to intervene if CBP personnel are overwhelmed by migrants.
Defense Secretary James Mattis had rejected an earlier CBP request which would have allowed troops to perform activities like crowd and riot control because the Pentagon considered them to be law enforcement duties.
Active-duty troops are prohibited by federal law from performing law enforcement activities unless specifically ordered by Congress or the president.

BLM crowds gather to protest after Minnesota police officer fatally shoots driver during traffic stop
More than 172,000 migrants, most in nearly two decades, stopped at US-Mexico border in March
Migrants coming from Central America to US: ‘We don’t have many options’
Report: Caitlyn Jenner mulling a run for California governor
California to fully reopen on June 15 if COVID-19 vaccine supply, hospitalization rates favorable
Two injured in shooting near Fort Detrick in Maryland, Navy suspect killed after entering military base: Officials