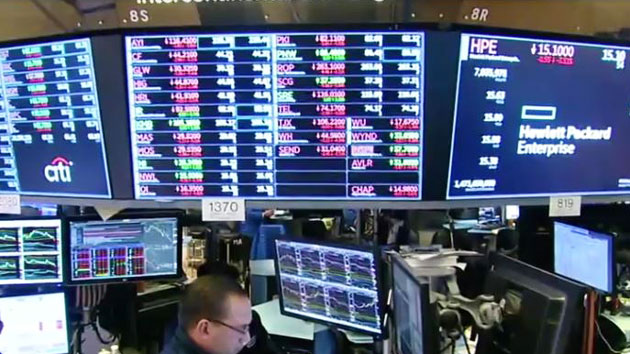 ABC News(NEW YORK) — The Dow Jones plunged nearly 500 points in early trade on Tuesday, dragged down by disappointing Target news and a continuing slump in tech companies.
The Dow rebounded slightly after 10 a.m. but was still down 414.13 points — or 1.7 percent — in late morning trade.
Target stock fell 9.5 percent after reporting weaker-than-expected earnings for the third quarter.
The retailer had recently said it would be hiring 120,000 seasonal workers for the holiday shopping season.
The tech-heavy NASDAQ was trading 46 points — or 0.67 percent — lower, at 6,982. Some tech companies were also having a rough day.
All eyes were on Apple, whose shares were down 3 percent to trade at $180.07, adding to previous losses amid reports of weakened iPhone demand.
The slump also comes after the company announced it would no longer disclose unit sales of its iPhones.
The slide weighed down tech stocks in general, which have been tumbling over the past month.
This is a developing story. Please check back for updates.
Copyright © 2018, ABC Radio. All rights reserved.