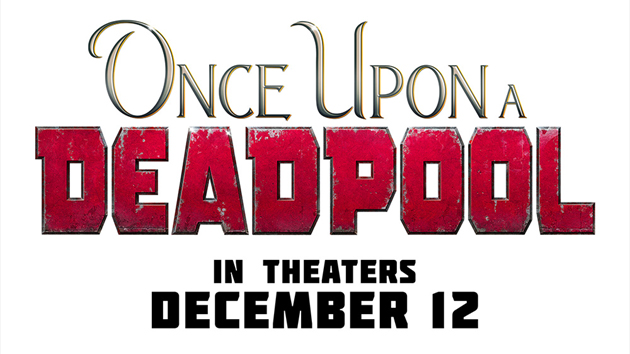 Twentieth Century Fox Film Corporation(NEW YORK) — What better way to get into the holiday spirit than by watching a foul-mouthed, pun-spouting, murderous super hero do his thing?

That's apparently what the studio behind Deadpool 2 thinks, which is why they're releasing a PG-13-rated version of this year's R-rated box office hit, re-titled Once Upon a Deadpool. And they've recruited Fred Savage to lend them a hand.

A new trailer opens with star Ryan Reynolds narrating, in his best feel-good holiday movie trailer guy voice: "Right before Christmas, a good guy in red is coming to theaters with his new sidekick, Fred." Then cut to 42-year-old Savage sitting in bed, in a set that's clearly a callback to his role in 1987's The Princess Bride, when he was just 11.

"Why am I here?" Savage demands, clearly not pleased. The answer, in part: because his legs have been duct-taped to the mattress.

We don't want to spoil the rest of it for you — you can check out the trailer on YouTube now.

The idea behind the Deadpool 2 PG-13 re-release is apparently to attract kids during their holiday break, kids too young to see the R-rated version. If that's not your speed, you can still watch the Deadpool 2 Plus Super-Duper Cut, available on digital with about 15 minutes of even more content that was too questionable even for the R-rated version.

Watch the trailers for ‘Set The Record Straight: The Jam Master Jay Case’ and Uzo Aduba’s ‘In Treatment’
See Amy Adams and an all-star cast in creepy new trailer for ‘The Woman in the Window’
Check out the trailer to the animated ‘Batman: The Long Halloween’
Watch the trailer for ‘Monster’ from executive producers John Legend, Nas, and Jeffrey Wright
Morgan Freeman stars in new COVID-19 vaccine PSA: “If you trust me, you’ll get the vaccine”
“I’m done running from my past” — New trailer released for ‘Black Widow’