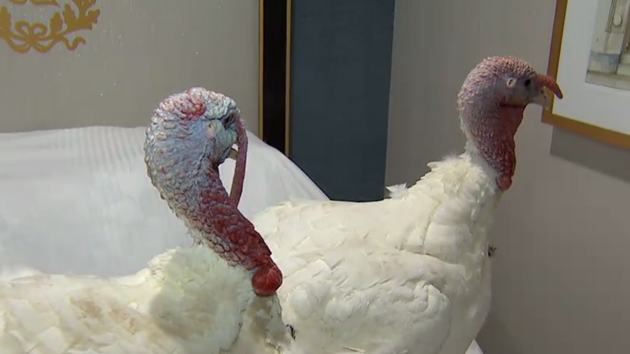 ABCNews.com(WASHINGTON) — The midterms elections may have ended earlier this month but another election season is in full flight between the two turkeys vying to become this year’s official National Thanksgiving Turkey.
This year’s candidates: Peas and Carrots.
One of the two turkeys will be selected via an online White House poll to become this year's National Thanksgiving Turkey.
The turkeys have been carefully groomed for a White House event, trained from a young age to be comfortable with lights, crowds, and music to make them comfortable in the limelight.
“When we started we had 50 of them and then we worked with them to see which ones were nicer, not as aggressive, we've kind of trained them to sit on a table and usually if you put your hand softly on their back it calms them and they'll be really calm, we hope, and we train them to kind of gobble sometimes,” National Turkey Federation Chairman Jeff Sveen told ABC News.
This year's turkeys hail from a farm in South Dakota. They were driven to Washington over the weekend and checked into the Williard Hotel, where the birds are staying in their very own hotel suite ahead of White House event.
And though only one turkey will get the official White House pardon, both will be spared from the Thanksgiving table.
After tomorrow’s pardoning ceremony, Peas and Carrots will move down to Virginia Tech University where they will be housed at a facility named “Gobbler’s Rest” where they will live out the remainder of their natural lives. But while these turkeys are guaranteed not to become dinner, these 20-week old birds likely only have a few good months of life left to live.
"With these domestic turkeys they don't have a long lifespan because they were bred for a purpose of going into the food supply, and if these guys live to a year, that's great, beyond that that's greater, so they don't have a long life span," explains Rami Dalloul of Virginia Tech University.
The tradition of the president pardoning a turkey can be traced back as far as President Abraham Lincoln, who spared a turkey from becoming the family's Christmas meal at the intervention of his son.
But the tradition of the formal turkey pardoning, as we know it today, didn't start in earnest until President George H.W. Bush in 1989, who jokingly passed down a pardon to the turkey presented to him as animal rights activists protested nearby, according to the White House Historical Association.
"Let me assure you, and this fine tom turkey, that he will not end up on anyone's dinner table, not this guy – he's granted a presidential pardon as of right now – and allow him to live out his days on a children's farm not far from here," Bush said at the time.