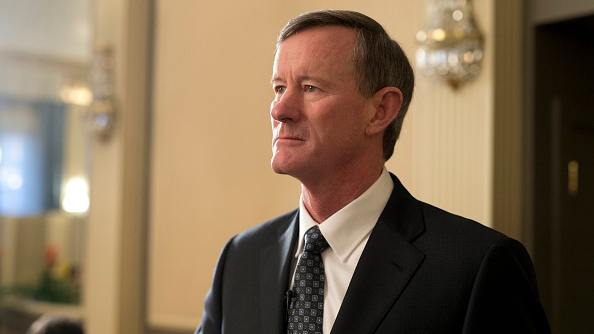 Robert Daemmrich Photography Inc/Corbis via Getty Images(WASHINGTON) — President Donald Trump continues to squabble with retired Adm. William McRaven, the commander of the raid that killed Osama bin Laden, now falsely claiming credit in a tweet for pointing out the terrorist’s name in a book he authored before the 9/11 terrorist attacks.
Here's how the back-and-forth is unfolding.
Trump's Bin Laden claim
Trump’s tweet is an apparent reference to a book he authored in 2000, titled "The America We Deserve," where the future president criticizes President Bill Clinton’s shifting national security policy.
In the book's sole Bin Laden reference, Trump only briefly mentions the terrorist leader and does not fully address the scope of the threat he posed.
“Instead of one looming crisis hanging over us, we face a bewildering series of smaller crises, flashpoints, standoffs, and hot spots. We’re not playing the chess game to end all chess games anymore. We’re playing tournament chess — one master against many rivals,” Trump wrote. “One day we’re all assured that Iraq is under control, the UN inspectors have done their work, everything’s fine, not to worry. The next day the bombing begins. One day we’re told that a shadowy figure with no fixed address named Osama bin-Laden is public enemy number one, and U.S. jetfighters lay waste to his camp in Afghanistan. He escapes back under some rock, and a few news cycles later it’s on to a new enemy and new crisis.”
Trump's claim on military aid to Pakistan
In his second tweet, Trump boasts about cutting off military aid to Pakistan. In September, the Pentagon canceled a remaining pot of $300 million bound for Pakistan, bringing the total in military assistance cuts to $800 million this year.
That's financial aid that the U.S. had traditionally reimbursed to Pakistan for military spending to hunt militants. The Trump administration says it is withholding that money because Pakistan has done little to end the safe haven there for terrorist groups operating in the region.
The State Department’s assistance to Pakistan is less, contributing to programs that support economic development, education and social services, and democracy and human rights promotions.
In FY 2018, the State Department shelled out $337 million to Pakistan, a cut representing nearly half of the $631 million it received in FY 2017, and down from a high of $691 million in FY 2015, according to the department's foreign assistance tracker.
Trump V McRaven
Trump initially slammed McRaven as a "Hillary Clinton fan" during an interview with Fox News that aired this weekend, contending it would have been nice if bin Laden had been captured sooner.
“Wouldn’t it have been nice if we got Osama bin Laden a lot sooner than that, wouldn’t it have been nice?” Trump asked rhetorically, emphasizing that bin Laden lived in a “mansion” in Abbottabad, Pakistan. “But living in Pakistan right next to the military academy, everybody in Pakistan knew he was there.”
McRaven responded to Trump’s comments on Fox News, denying that he backed any candidate in the 2016 presidential campaign while standing by his previous comments that the president's attack on the media is the greatest threat to U.S. democracy.
"I did not back Hillary Clinton or anyone else," McRaven noted. "I am a fan of President Obama and President George W. Bush, both of whom I worked for. I admire all presidents, regardless of their political party, who uphold the dignity of the office and who use that office to bring the nation together in challenging times."
"I stand by my comment that the President's attack on the media is the greatest threat to our democracy in my lifetime," McRaven continued. "When you undermine the people's right to a free press and freedom of speech and expression, then you threaten the Constitution and all for which it stands."
Last August, McRaven defended former CIA director John Brennan after Trump revoked his security clearance, writing a critical op-ed for the Washington Post where he asked the president to revoke his own security clearance in solidarity with Brennan, also a frequent critic of the president.
"Few Americans have done more to protect this country than John. He is a man of unparalleled integrity, whose honesty and character have never been in question, except by those who don’t know him," McRaven wrote. "Therefore, I would consider it an honor if you would revoke my security clearance as well, so I can add my name to the list of men and women who have spoken up against your presidency."
McRaven, a former Navy SEAL, led the U.S. Joint Special Operations Command from 2011 to 2014 before retiring from the military.
Days after he asked Trump to revoke his security clearance, McRaven resigned from his position with the Defense Innovation Board, an advisory committee of former Defense senior officials who make recommendations on future projects and technologies.
Trump has not revoked McRaven’s security clearance.