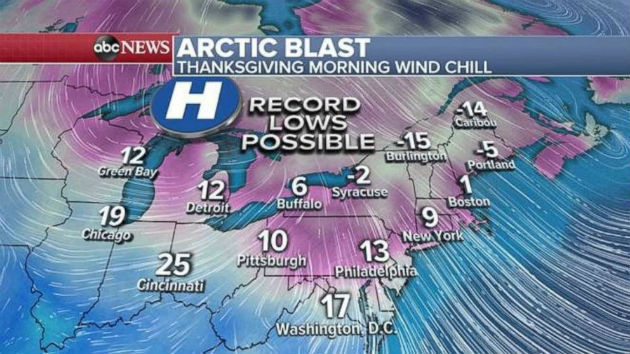 ABC News(NEW YORK) — Record cold is headed to the Northeast for Thanksgiving.
It could be the chilliest Turkey Day on record for New York and Boston, with wind chills below zero in some areas on Thanksgiving morning.
Here is what you need to know:
— Snow will be falling Tuesday morning in upstate New York and northern New England. Up to six inches of snow is possible in some areas. The snow will linger in the afternoon and move out by Tuesday night.
— Rain is headed to the West Coast Wednesday, which will provide some relief to firefighters battling the deadly wildfires. However, heavy rain in Northern California does bring the risk for mudslides and flash flooding.
— No major storms are in the forecast for Thanksgiving.
— On Thanksgiving many Northeast residents could wake up to temperatures in the teens or single digits.
— Thursday is likely to be the coldest Thanksgiving along the East Coast since 1996.
— Wind chills on Thursday could reach the teens in Philadelphia and New York, and near zero degrees in Boston. Wind chills may be below zero in upstate New York and northern New England.
— Boston could experience its coldest Thanksgiving on record since 1901, which was a frigid high of 24 degrees.
If you are bundling up to hit the road for Thanksgiving, be mindful of the dangers on a week when so many are traveling.
The National Safety Council projects that 433 people may be killed and another 49,400 may be seriously hurt in car accidents over the Thanksgiving holiday, which runs from Wednesday night to Sunday night.
Last year, Thanksgiving was the second deadliest holiday on the roads, the safety council said. The deadliest holiday was the Fourth of July.
The arctic blast is forecast to move through quickly, with temperatures returning to the low 50s on Sunday.
Copyright © 2018, ABC Radio. All rights reserved.