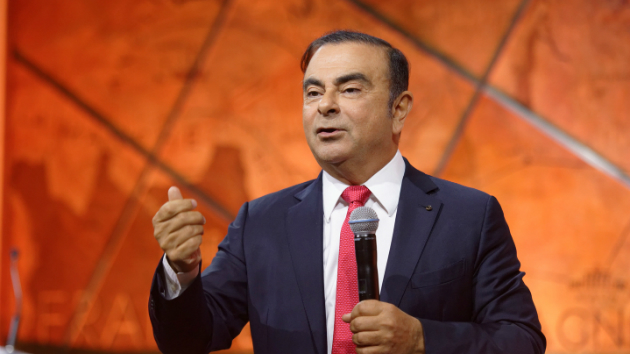 Nissan(TOKYO) — Nissan Motor's chairman and another top executive have been arrested in Japan on fraud charges.
In a statement Monday, Nissan said an internal investigation found that for several years its chairman, Carlos Ghosn, and representative director, Greg Kelly, “have been reporting compensation amounts in the Tokyo Stock Exchange securities report that were less than the actual amount, in order to reduce the disclosed amount of Carlos Ghosn's compensation.”
“Also, in regards to Ghosn, numerous other significant acts of misconduct have been uncovered, such as personal use of company assets, and Kelly's deep involvement has also been confirmed,” the automaker added in its statement.
Both Ghosn and Kelly have since been fired.
In a news conference Monday in Tokyo, Nissan CEO Hiroto Saikawa said he feels disappointment and frustration.
“On behalf of the company, I would like to express my deep apologies,” Saikawa said, speaking through a translator.
“We need to really look back on what happened seriously and take immediate and fundamental countermeasures to solve this,” he added.
Copyright © 2018, ABC Radio. All rights reserved.