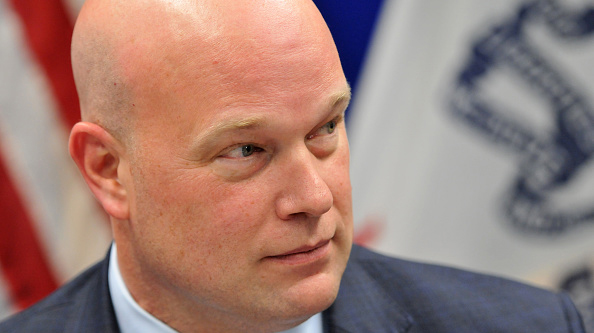 Steve Pope/Getty Images(WASHINGTON) — As speculation swirls over whether Acting Attorney General Matt Whitaker might try to rein in special counsel Robert Mueller’s investigation, Mueller’s team argued to a federal appeals court Monday that Whitaker’s appointment “has no effect” on the special counsel’s authority and that Mueller continues to have “the full power and independent authority to exercise all investigative and prosecutorial functions of any United States Attorney.”
“Acting Attorney General Whitaker’s designation neither alters the Special Counsel’s authority to represent the United States nor raises any jurisdictional issue,” Mueller’s team wrote in a brief filed Monday. “The Special Counsel continues to exercise the same authority, and the jurisdiction of the district court and this Court is intact.”
The filing came as part of an ongoing legal battle between Mueller’s team and Andrew Miller, a former associate of political provocateur Roger Stone. Miller has refused to comply with a subpoena demanding his testimony before a federal grand jury, and a lower-level court judge found him in contempt of court. Miller and his lawyers are now urging the U.S. appeals court in Washington, D.C., to reject the contempt finding, insisting Mueller’s appointment was unconstitutional.
After President Donald Trump appointed Whitaker to take control of the Justice Department – and the Mueller probe — the federal appeals court asked both sides to weigh in on whether the appointment alters the case.
Over the past year, Whitaker has repeatedly criticized Mueller’s investigation, at one point even suggesting how a new attorney general could choke off funding to Mueller’s office. A Justice Department spokeswoman recently said Whitaker “is fully committed to following all appropriate processes and procedures at the Department of Justice.”
Miller’s team argued to the court the designation of Whitaker as Acting Attorney General “has no effect on this case.”
In their own brief filed Monday, Miller’s attorneys agreed with Mueller that Whitaker’s new role had no impact on the arguments in the case.
“The short answer is that the designation of Matthew G. Whitaker as Acting Attorney General by the President following the resignation of Attorney General Jeff Sessions does not affect Appellant’s argument that Special Counsel Mueller was required to be appointed by the President and confirmed by the Senate under the Appointments Clause as a principal officer,” Miller’s lawyer, Paul Kamenar, wrote.
Kamenar added that the designation had no effect on Miller’s alternative argument that Mueller was required to be appointed as an inferior officer under the Excepting Clause by the then “Head of the Department” — in this case, Sessions — and not by Rosenstein.
Miller’s appeal is steered by the National Legal and Policy Center, a well-funded conservative legal group with a deep history of mounting legal challenges against left-leaning organizations and Democratic politicians.
Kamenar’s challenge to the legitimacy of the special counsel probe is based on a claim that Mueller’s appointment was not handled properly. He argues Mueller has been effectively operating as a “U.S. Attorney at large,” and as such, should have been appointed by the president and confirmed by the Senate – neither of which occurred.
Earlier this month, a panel of three D.C. Circuit Court of Appeals judges presiding over the case heard opening arguments in the matter just 24 hours after President Donald Trump’s dismissal of Attorney General Jeff Sessions.
The latest court filings come in response to a request from the federal judges for additional briefs to address President Donald Trump’s appointment of Whitaker to replace Sessions, and what impact the change had on either party’s arguments. Miller, 34, has told ABC News he paints houses for a living now but served as an aide to Stone until 2013.
Stone, who was a longtime informal political adviser to Trump, once described Miller as his “wingman” because he helped manage Stone’s schedule, travel and media appearances, and also provided “some I.T. work.” Miller identifies himself as a libertarian and has said he did not support Trump’s candidacy, but he did accompany Stone to the 2016 Republican National Convention.
More than a dozen individuals associated with Stone have met with the special counsel since last summer and many of those have appeared before the grand jury impaneled by Mueller’s team. The witnesses have told ABC News they were asked about Stone’s dealings during the 2016 election and what if any contact he may have had with WikiLeaks founder Julian Assange through an intermediary – an allegation Stone denies.
In response to the special counsel's brief, Kamenar told ABC News in a statement on Monday, “The Special Counsel’s brief simply argued that the appointment of Whitaker has no bearing on the way the Court should resolve our challenge to Mueller’s authority. In that regard, we both agree. But if we’re right and Mueller is unconstitutionally appointed as an inferior officer, Whitaker would need to appoint him anew to make Mueller legal for any future actions he might take.”