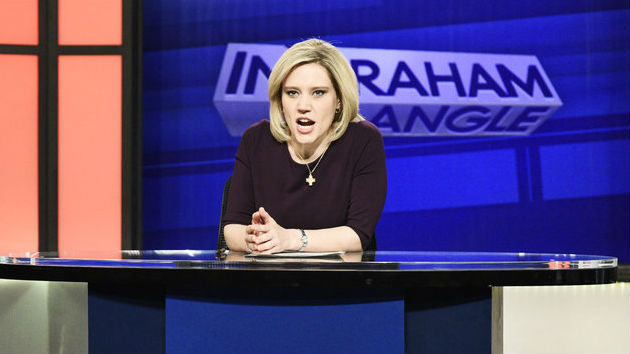 NBC/Will Heath(NEW YORK) — The last Saturday Night Live episode before Thanksgiving saw the return of Kate McKinnon's Laura Ingraham — and a number of other targets to be mocked: Jeanine Pirro, Nancy Pelosi and Mark Zuckerberg.

In the show's cold open, a spoof of Fox's The Ingraham Angle, McKinnon’s Ingraham opened with her "facts," including "Hispanics all voted twice" and "Latinos can have babies every three months."

She then tossed to Pirro, again played by Cecily Strong, who responded: "I hate them, Laura."

The attacks turned to Zuckerberg as Facebook came under fire this week for reportedly hiring a PR firm to plant negative stories about Facebook critics.

"I can't be any more transparent," he followed up. "Have you seen my skin?"

Rep. Marcia Fudge, played by Leslie Jones, came on to discuss a possible overthrow of Pelosi as House Speaker.

"I love Nancy Pelosi, but her baby sister is a redwood tree," she said. "She just calls the Old Testament, the testament."

The biggest criticism was reserved for Ingraham herself, though, who sprinkled in ads for the few companies who hadn't abandoned her — including a personal-sized turkey. "Have you alienated everyone in your family? Then have your very own Teeny Tiny Turkey," the ad urged.

"If I was there in person, I would knock the fudge out of you," Jones told Strong.

The episode was hosted by Steve Carell, marking his third time on the show, and featured musical guest Ella Mai. Carell’s fellow The Office alums, Jenna Fischer, Ed Helms and Ellie Kemper all appeared during his monologue, calling for a reboot of the show.