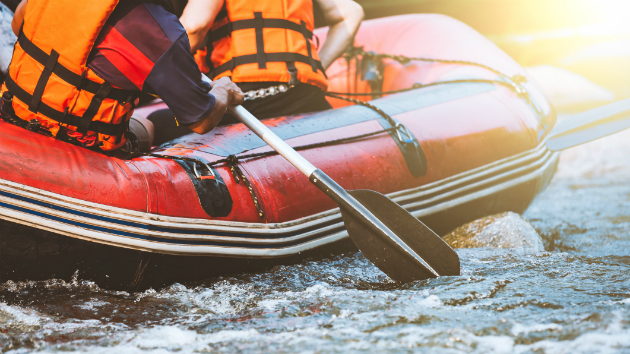 iStock/Thinkstock(NEW YORK) — Members of a bachelor party, which turned tragic after a whitewater-rafting accident in Costa Rica killed several attendees, described to ABC News how difficult it was to inform their families.
Luis Beltran, the groom, and 13 of his friends and family were on a rafting tour on Oct. 20 when all three rafts they were occupying capsized, killing Beltran's brother, Sergio Lorenzo, and Ernesto Sierra, Jorge Caso and Andres Denis. Kevin Thompson Reid, 45, a Costa Rican guide, also died in the accident. The Americans killed were aged 25 to 35, and the remaining tourists and guides survived.
Denis and his girlfriend had been dating for more than 13 years, one friend said, adding that she didn't believe him at first when he broke the news.
"Do you know how difficult it was for me to speak to Andy's soon-to-be fiancee?" the man asked. "… they were each other's lives."
Beltran said the trip turned from "two or three days of nothing but great memories" to catastrophe within five minutes.

The accident occurred on the last day of the trip, Beltran said, adding that the group was set to fly back to the U.S. the next day.
After the accident, Beltran and another friend stayed in Costa Rica for several days to await the arrival of the families of the deceased and help with the legal and funeral arrangements.
The group of 14 had traveled from Miami and arrived in Costa Rica on Oct. 18 to celebrate Beltran's upcoming wedding.
New video obtained by ABC News, taken just moments before the adventure turned deadly, showed the group loading up on inflatable rafts. The video also showed the popular Naranjo River raging after days of heavy rain.
Authorities in Costa Rica said that the river was swollen and that flooding alerts had been issued.
Chris Comas, who survived, directed ABC News to a statement put together by the men's families on a GoFundMe page.
In the statement, survivors and family said the men had been friends for years and had wanted to do something special before their friend's wedding day.
"Everyone struggled to get back on the rafts, with some efforts being successful, but ultimately the rafts continued to capsize due to the immense current. Within minutes, all of us were careening down the river with life jackets and helmets just trying to stabilize and find something to hold on to," the statement said.
"Throughout the dangerous ride down the river, all of us struggled to stay above water, swallowing lots of it on the way down as our bodies ricocheted against the rocks in the water while struggling to survive. Most of us were ultimately able to grab hold of rocks or barriers in or around the water and await the rescue teams to get to us. Unfortunately, not all of us were so lucky. Four of our dear friends drowned in those waters," the statement said.
Sierra, Caso, Lorenzo, Denis and Reid disappeared into the rapids and were carried downstream, authorities said.
"The family is completely devastated. He was the best blessing our family received on a Christmas morning. He has overcome so many obstacles in his life and we were completely proud. He had just graduated college and was studying for the LSATS," Denis' family said in a statement to ABC News.
Authorities searched for hours by air and by boat, before eventually recovering all five bodies before nightfall.
The case is being investigated, Marco Monge, a press officer for Costa Rica's Judicial Investigation Organization, confirmed to ABC News last month.
An official at the Costa Rican Tourism Institute said the rafting company, Quepoa Expeditions, is under investigation and its offices have been raided.
The official told ABC News that a yellow advisory had been out for the river Saturday because of the flooding and that no other companies were on the river because of the conditions.
A GoFundMe campaign has been opened to pay for the funerals of the victims, Beltran said. Some of the funds will also go to Lorenzo's children, he added.