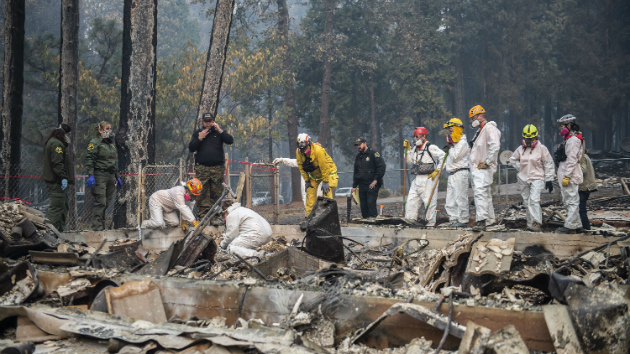 Hector Amezcua/Sacramento Bee/TNS via Getty Images(NEW YORK) — The number of people who remain missing in the wake of a pair of wildfires that have been blazing across both ends of California remains close to 1,000 as of early Monday morning.
The two blazes, which both ignited last week, have claimed a total of 80 lives while laying waste to a total area of nearly 400 square miles, according to the California Department of Forestry and Fire Protection. Officials said that 63 of the remains have been positively identified so far.
The vast majority of the deaths — 77 total — were due to the Camp Fire in Northern California's Butte County, making it the deadliest and most destructive wildland fire in the state's history.
The number of people missing or unaccounted for in Butte County was 993 as of late Sunday, though those figures may continue to fluctuate as authorities track down the names on the list, according to Butte County Sheriff Kory Honea.
President Donald Trump arrived in California on Sunday to survey the devastation and meet with firefighters, alongside California Gov. Jerry Brown and the state's governor-elect, Gavin Newsom.
The president stopped first in Paradise, where he called the damage "total devastation."
"We've never seen anything like this in California," Trump said.
The president later visited Malibu to tour devastation from the Woolsey Fire.
Meanwhile, the smoke from the flames has descended across the Golden State and choked the air in major cities, including San Francisco. Officials have advised residents in the affected areas to remain indoors and wear a protective mask outside.
The National Weather Service issued a red flag warning for California through Sunday as humidity drops and wind gusts could get up to 40 mph in the Camp Fire zone.