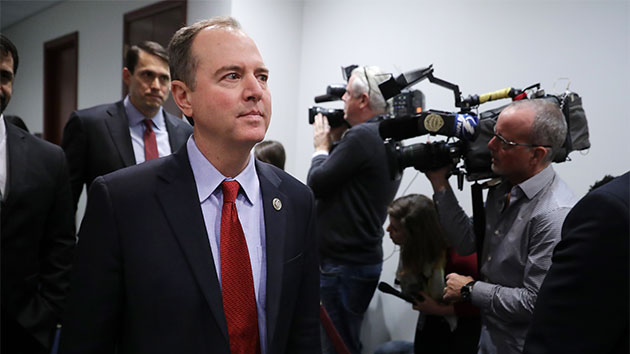 Chip Somodevilla/Getty Images(WASHINGTON) — The top Democrat on the House Intelligence Committee said President Donald Trump’s appointment of Matthew Whitaker as acting attorney general was unconstitutional because the attorney general is a “principal officer” and those positions require Senate confirmation under the Constitution.

“I think the appointment is unconstitutional,” Rep. Adam Schiff of California told “This Week” co-anchor Martha Raddatz in an interview Sunday morning. “He is clearly a principal officer and the fact that he is a temporary principal officer doesn't mean that that is any less subject to Senate confirmation.”

“Will Democrats still challenge that appointment and are you concerned about him overseeing the Mueller investigation?” Raddatz asked Schiff.

“Yes and yes,” said Schiff, who will be the chairman of the House Intelligence Committee in the new Congress.

The president took to Twitter early Sunday afternoon to respond to Schiff’s criticism, pointing out that Mueller had not been approved by the Senate. Trump also misspelled Schiff's name in the tweet.

"Wow, Mr. President, that’s a good one. Was that like your answers to Mr. Mueller’s questions, or did you write this one yourself?" Schiff replied on Twitter, referencing a statement Trump made Friday about his written answers to the special counsel.

"I write the answers. My lawyers don't write answers," the president said during a cybersecurity initiative bill signing in the Oval Office. "I was asked a series of questions, I answered them very easily."

The White House has not responded to an ABC News request for comment.

During his interview with Raddatz, Schiff called Whitaker's appointment flawed.

“The biggest flaw from my point of view is that he was chosen for the purpose of interfering with the Mueller investigation,” he said.

Because Whitaker has publicly criticized Mueller’s investigation in the past, including in an August 2017 op-ed for CNN, Schiff said that “ethically he should have absolutely nothing to do with the investigation.”

While Schiff is a frequent critic of the president’s, some Republicans have doubted whether Whitaker is right to permanently lead the Justice Department.

In a separate interview on “This Week,” Sen. Roy Blunt, who serves as the Vice Chairman of the U.S. Senate Republican Conference, said he didn’t think Whitaker should be attorney general.

“I don't know Matt Whitaker well,” Blunt told Raddatz. “On the occasions I've had with him to be — he's been very responsive and has seen that the Justice Department responded to the things I've asked about. So in terms of an acting capacity, he does not — he seems to be a person that has the ability to do that acting job.”

“But not a permanent position; is that what you're saying?” Raddatz pressed.

“Well, I would think — I — I would think not. But that's — the president needs to determine who's going to be permanently at the Justice Department as soon as he can,” he said.